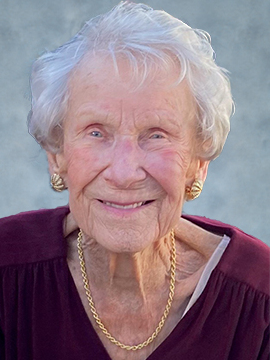 Mildred was one of six sisters and one brother raised by hardworking parents Josephat (“Joe”) and Rosalie (“Rose”) Tkaczyk on a pioneer farm near Redwater, Alberta. Her sisters, Sophie, Pearl, Helen, Lena, Mary and her brother Alec Tkaczyk and Morris Ozubko raised like her brother, predeceased her. Her sister Annette survives her in Edmonton, Alberta. She was proudly Ukrainian despite prevailing attitudes of the time and cared deeply about her traditions and homeland.

A frugal farm upbringing was the foundation of Mom’s life. Although there was no running water, no indoor plumbing, a wood burning stove and two bedrooms upstairs for up to eight children, there was an abundance of joy. School was two miles away by horse drawn wagon, by sled or by foot. Chores were shared and required. Church and the community were the center of her life. After high school Mildred travelled with her friends and picked fruit in the Okanagan and went further west to begin a lifelong interest in the Grey Cup by attending the 1955 final in Vancouver, BC. The Tkaczyk sisters and brother Alec and Morris remain tightly knit for the rest of their lives and at one point five sisters resided within two miles of one another in Edmonton. Christmas Eve was a special time of familial celebration as twenty cousins and all the uncles and aunts would squeeze together in one of the sister’s homes with so many coats and winter boots at the small entrance that you had leap over them to join the warmth of the room for a feast of pyrohy and holubsti, drinks and carols.

Mildred met Gordon who was from Foremost, Alberta when they both worked at Imperial Oil in Devon, Alberta. They were married on August 25, 1956. Mildred and Gordon had four children, Lindsay, Laurie (Craig), Leslie and Cathleen (Chris). Imperial Oil opportunities took them to Devon, Redwater, Edmonton, Sarnia, Toronto, back to Edmonton and finally to Calgary. These many family moves involved re-establishing the children and relying on Mom’s resourcefulness and flexibility. The first airplane flight for Mom and her four kids was when we moved to Toronto in 1965. Summer road trips in the blue station wagon through Canada and the United States became a time of discovery for the family. While living out east, Mom’s sisters would travel east and the Hoods would travel west, almost always by car. These adventures sparked Mom’s love of travel which later in life included Europe, Mexico, Australia and golf trips to California and Arizona.  Mildred and Gordon were an amazing couple and enjoyed a loving and fruitful life together until Dad passed away on June 13, 1994 while golfing with Mom. She missed him every day of the twenty-eight years since that untimely passing. She was devoted to her family. Her grandchildren, Lindon, Christian, Kieran, Jack, Tom, Mary, Patrick, Shannon, Kady, Gordon, Olivia and great granddaughter Eva were crazy about their “Baba”.

Mildred was multi-talented. She was an expert seamstress, gardener, avid bridge player, regular walker and a gifted wife, homemaker and cook. Her deep concern for the environment predated the awareness that the world has now embraced. She enjoyed many rich and long-lasting friendships up to her last day. Her genuine interest about how others were doing made her a listener first.

She taught us the value of family – by her kindness, selflessness, hard work, frugality, generosity of spirit and her indomitable faith in a better day ahead. She attended St. Bonaventure Catholic Parish in Calgary for over 40 years. Mildred was wise. She remained calm in the eye of the storm – always hopeful, sunny and uncommonly kind. We will miss her deeply. Our gratefulness exceeds our grief.

Mom deeply believed in the survival of the Ukrainian people by supporting the Ukraine Humanitarian Crisis Appeal through The Canadian Red Cross Society.

Mildred’s Funeral Mass will be celebrated at St. Bonaventure Catholic Church (1600 Acadia Drive S.E., Calgary, AB) on Monday, January 16, 2023, at 11:00 a.m. There will also be a celebration for Mildred Hood on May 13, 2023, in Calgary AB. Details will follow. Condolences, memories, and photos may be shared and viewed here.

May you continue to inspire us:
To enter each day with a generous heart.
To serve the call of courage and love
Until we see your beautiful face again
In that land where there is no more separation,
Where all tears will be wiped from our mind,
And where we will never lose you again.

By John O’Donohue
To Bless the Space between us

Share Your Memory of
Mildred
Upload Your Memory View All Memories
Be the first to upload a memory!
Share A Memory
Send Flowers