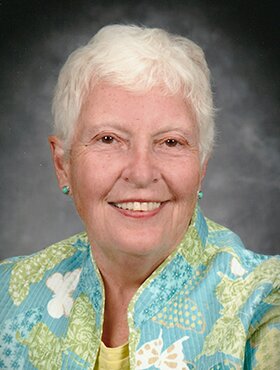 Judith (Judy) Ann Stuehrenberg passed away on January 12, 2023 at Foothills Hospital in Calgary, Alberta after a brief illness at the age of 79 years.

Judy was born November 19, 1943 in Jefferson City, Missouri to William and Bertha Sippel. She was the youngest of 4 children. After her mother died when Judy was 8 years old, she was raised by her oldest sister Ruth (who was 18 years older) and her husband Charles Mueller. Judy attended Faith Lutheran School then graduated from Jefferson City High School in 1961. She studied elementary education at Concordia Teachers College in Seward, Nebraska and after graduating in 1965 she was placed as a kindergarten teacher in Dawson Creek, British Columbia.

While there she married Edward Garossino on March 27, 1967. They moved several times for his job with the Hudson Bay Company including Kitimat, BC where their son Kent was born in 1968 and Yellowknife, Northwest Territories where their son Kevin was born in 1973. When Kevin was 2 months old, they moved to Canmore, Alberta where Judy got a job teaching school. She taught all levels of elementary school as well as a music program at various times during her 30-plus-year teaching career. She was involved with church activities and was a leader in the Junior Forest Wardens program.

After divorcing Edward, Judy met Daniel Stuehrenberg at a Lutheran Singles Conference in Fort Collins, Colorado in July 1987. On July 16, 1988, she and Dan were married at Shepherd if the Valley Lutheran Church in Canmore. Together they traveled to six provinces and more than twenty USA states.

Judy retired from her teaching career in 1998. She continued volunteering at her church and was active in Canmore community activities. In 2007 they moved to Cochrane, Alberta. Judy taught a women’s Bible study and sang in the choir at St. Peters Lutheran Church and enjoyed getting together with friends at Tim Hortons for a steeped tea.

She exercised regularly with a water aerobics group and went for daily walks. On her early morning walk to Tim Hortons, she took a garbage bag and collected litter along the way. During their time in Cochrane Judy and Dan spent ten seasons as snowbirds, living at Venture Out Resort in Mesa, Arizona during some of the winter months. While there Judy was involved in their glass arts club and made many fused glass objects. She sang alto in the Sunday morning choir and participated in a women’s Bible study. She also started a group that made greeting cards and was a member of the shuffleboard club. Every morning she went to an exercise class called Stretch and Tone. She went for long walks or rode her 3-wheeled bike.

On February 9, 2019, while in Arizona, Judy suffered a severe stroke which left the right side of her body paralyzed and unable to communicate effectively. After a two month stay at Foothills Hospital in Calgary she was transferred to Bethany Calgary.

She was able to get some help from a speech therapist for her aphasia and she began a physical rehab program at the Association for the Rehabilitation of the Brain Injured (ARBI). That program was terminated due to COVID early in 2020. With COVID restrictions at Bethany visitation by friends and family was limited and her transfer to Bethany Cochrane was delayed until June 2021. Being back in Cochrane made it easier for family and friends to visit. Judy enjoyed group activities, music therapy, and worship services at Bethany.

Funeral Services will be held at St. Peter's Lutheran Church (43015 George Fox Trail, Cochrane, AB), on Saturday, January 28, 2023 at 2:00 p.m. Reception to follow in the Church Hall. The service will be live streamed and archived through the church's website www.saintpeters.ca/services. Condolences, memories, and photos may be shared and viewed here.

Share Your Memory of
Judy
Upload Your Memory View All Memories
Be the first to upload a memory!
Share A Memory
Send Flowers