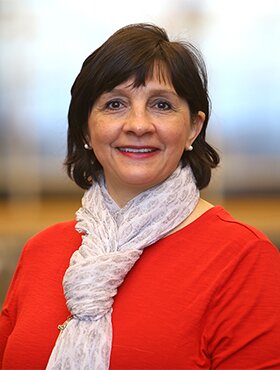 On Thursday, January 12, 2023, Monica Patricia Rincon Garcia, of Calgary, AB, loving wife and mother of three, passed away at the age of 56 years.

She was a member of the St. Joseph OCDS Calgary (Carmelite seculars) and volunteered with the Mustard Seed Calgary (social service organization) helping people in need. Monica Patricia accomplished much through her life and was particularly proud of her academic and scientific achievements, her passion for Natural Family Planning (NFP) counseling, giving back to the community, including volunteer work at Calgary Waldorf School, churches, and homeless shelters. Monica had passion for women health, sacred places and readings, fitness, music, dance, Latino food, and ethnic cuisine.

Monica’s most memorable vacations were when she was in Disney World at the age of 9, a visit to Yosemite National Park in California when was expecting her first child, a trip to Canmore, Lake Louise and Banff National Park regularly with her family, and last summer to Edmonton to attend Pope’s Francis reconciliation mass.

“For surely I know the plans I have for you, says the Lord, plans for your welfare and not for harm, to give you a future with hope”. Jeremiah 29:11

She will be most remembered for her smile, laughter, warmth and passion for teaching and education.

A Concelebrated Funeral Mass will be celebrated at St. Michael Catholic Community (800 – 85th Street S.W., Calgary, AB) on Thursday, January 26, 2023 at 2:00 p.m. Family and friends who are unable to attend in person are invited to join Mrs. Rincon Garcia’s service streamed live and will be viewable at the Facebook and Youtube links on this page: St. Michael Livestream Info.

Share Your Memory of
Monica
Upload Your Memory View All Memories
Be the first to upload a memory!
Share A Memory
Send Flowers