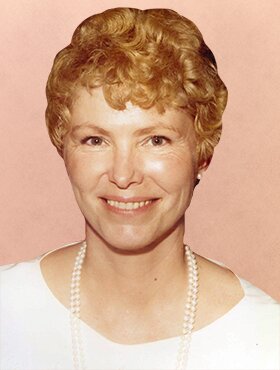 With profound gratitude, the family of Mary Helen Keefe, beloved wife of John A.C. Keefe, of Calgary, AB, announce the passing of her precious and radiant life on Saturday, January 14, 2023, at the age of 93.

Mary was born on September 11, 1929, to Joe and Ida Upton and grew up in Toronto, ON. She graduated high school in 1947, then completed one year of Normal School in 1948. She then began a lifetime interest in teaching young children. This would be the start of a calling that would continue and evolve for most of her life.

Also, in January 1947, she met the love of her life, John. They married on July 4, 1952. One of Mary’s most cherished memories was achieved this past year when she and her husband surpassed the 70-year wedding anniversary milestone. They celebrated this accomplishment with their children and close friends in attendance. Early in their marriage, Mary travelled with her husband for his work, to various locations in Canada and the US, including Gull Lake, SK, Northern Quebec, and even Dallas, TX, finally moving to Calgary, AB, in 1964.

After being an attentive mom to four children, Mary completed her Bachelor of Education degree at the University of Calgary, then worked as a teacher-librarian at various elementary schools in the Calgary area, up until her retirement in 1993.

Mary cherished the moments when she taught numerous children how to read – even being profoundly moved at the moment when each child realized they were actually “reading”! She had many treasured and artful ways of not only gaining a child’s attention but focusing it toward the desired end; instill in each child a great love of books. Mary was also an avid reader and lent her prodigious writing talents towards winning a $25,000.00 contest for writing a memorable jingle for ‘Spot Shot’ in the late 90s. (She would have had a heck of a career in advertising.)

In the mid-80s, Mary also travelled through Europe and Africa with her husband. She lived with her husband for an entire year in Morocco in 1986, and also visited Greece, France, Portugal, Egypt, as well as many other countries in Africa. Mary recalled a few personal travel highlights including taking a cruise of the Mediterranean and Greek Islands, visiting the pyramids of Egypt, as well as having a memorable wedding anniversary dinner at the world-famous Maxims in Paris.

After retirement, Mary and her husband visited various places in Canada and the US. However, in recent years, she and John Sr. had settled in Calgary, but still cherished her time with family and friends.

Always a great storyteller herself, she could do physical magic – her orange trick enthralled her children when they were young – and spread magic when she shared great memories of her own childhood. This included how the milk was delivered by horse and carriage, having to clean the kerosene lamps, and calling the family Model-T “old-rain-in-the-face” since it had no windows.

Up until the day she died, Mary considered the telephone a miracle. Such was the era and essence of her life. Those that knew her understand she will be well remembered as her beloved self.

Mary is survived by her husband John A.C. Keefe, her daughters Deborah, Elizabeth, and Mary (Stephen); her son John (Donna), as well as grandsons Paul and David (Carrie); and many nieces, nephews, and grandchildren located across Canada and the US.  Mary was predeceased by her parents Ida and Joe; and her three siblings, her brother Joe, and sisters Joan and Bernice.

A private family visitation is scheduled for Saturday, January 21, 2023. An informal Celebration of Mary’s Life will be held in the spring. Condolences, memories, and photos may also be shared and viewed there.