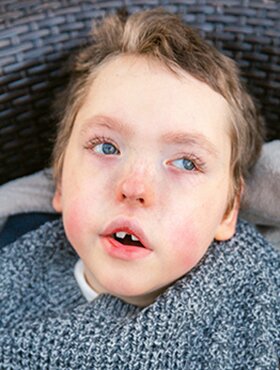 Cade Huitema, of Calgary, AB, passed away peacefully with family by his side on Saturday, January 14, 2023, at the age of 10 years.

Cade was born in Calgary, AB on November 6, 2012, at Foothills Medical Centre and spent 137 days in the NICU before finally coming home. Cade spent the first year of this life at home catching up and thriving.

Shortly after Cade’s first birthday, he became ill and was subsequently diagnosed with Krabbe Leukodystrophy. He was given six months to two years to live. Cade continued to defy all odds celebrating birthday after birthday.

Cade accomplished much through his life despite his severe limitations. He attended Grit Calgary Society, where he learned to communicate through an eye gaze, right for “yes” and left for “no”. We also discovered his wonderfully dry sense of humor. Cade enjoyed teasing his teacher and developmental specialists daily. He also took pleasure in joking with his Uncle Tyler. Despite being non-verbal Cade certainly got his point across to everyone and had the best eye roll.

Cade continued his learning journey attending both Copperfield Elementary and McKenzie Lake Elementary, building friendships with his peers and lasting relationships with staff.

Cade spent the past several years at home, where he was most comfortable with his family and favorite nurses. His brother Kean took any opportunity to cuddle up with Cade in bed or on the couch. Kai always looked out for Cade, making sure he had his iPad set up and that mom or dad were aware of what Kai thought he needed.

Cade has taught us how to be more compassionate and to accept and cherish life in all capacities. His sense of humor and ability to touch everyone’s heart, truly was his superpower.

Cade is survived by his mom, Melissa, and dad, Nolan, and his Brothers Kai and Kean. Cade is also survived by his grandparents Rick and Leanne Geirnaert, George and Debbie Huitema; his uncles, Tyler Geirnaert and Brian Lorfing; and his auntie, Andrea and uncle Maury Stearns; as well as his cousins, Maxwell and Eleanor Stearns.

Cade was predeceased by his twin brother, Cage Koen Huitema, who passed away on November 6, 2012, shortly after their birth.

A very special thank you to everyone who had a part in Cade’s care over the years.

In memory of Cade, we ask that friends and family who will be attending his service to please wear casual attire with Cade’s favourite colour red. His favourite outfit was a bright red long sleeve and comfy sweats.

Share Your Memory of
Cade
Upload Your Memory View All Memories
Be the first to upload a memory!
Share A Memory
Send Flowers