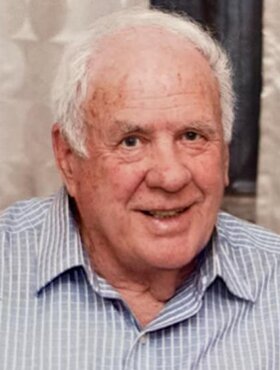 Ernest Meierhofer, beloved husband of the late Phyllis Meierhofer (nee Usher), of Calgary, AB, passed away on Tuesday, January 17, 2023, at the age of 88 years.

Ernest was born and raised in Calgary, in the community of Valleyfield, by his parents, Ernie Sr. and Mary. His home was located near the irrigation canal, so as a boy, he enjoyed playing on his homemade rafts in the summer and skating in the winter.

Ernie was gifted at working with his hands and his first few summer jobs, at the age of seventeen, included a sheet metal shop and then a glass shop.

At the age of eighteen, he underwent training, and then began to work as an aircraft mechanic for Canadian Pacific Airlines. Being the generous and kind young man he was, he offered to drive for the carpool to work. Phyllis was one of the beautiful passengers who worked in the parts department there. Amidst the traffic, Ernest fell in love and married his beloved sweetheart, Phyllis on June 8, 1957, and together they raised five beautiful children.

Nine years later Ernie was laid off and began to work for Firestone Tires, where he worked faithfully for the next seventeen years. He only took two sick days during his entire time there and was known as a dependable, hard-working man. In 1978, the tire plant shut down primarily because of the advent of radial tires. Ernest moved on to an oil and gas valve company, where he had the opportunity to work with his eldest son David. After seventeen years the company was sold so he retired.

Ernie spent much of his extracurricular time building and fixing things. He also built the family camper, bunkbeds, a speedboat, and the garage where he collected various tools and machines to aid him with projects. Not many people own a metal lathe, but Ernest did.

He was also a real hobbyist and enjoyed building and flying model airplanes, Photography, and even completed a kit that allows you to build your own television set! He developed his own pictures by turning the one and only family bathroom into a dark room, much to the dismay of his five young children. He was always interested in learning about the latest camera, tool, or skill that could be developed. Ernest also enrolled in an electronics course at Devry Institute and took a course in welding.

Ernie also had a great love of the outdoors, and you could often find him hiking or skiing a mountain with his family and friends. He found great refreshment in the river valleys and mountain peaks, and he passed his love on to his five children, who followed him up and down the trails. It seemed entirely appropriate that Ernie and Phyllis were captured in a photo beside Chester Lake, and that photo now graces the cover of “Canmore & Kananaskis Country” where the caption reads, “Short Walks for Inquiring Minds.”

Ernest will be fondly missed by his daughters, Lorraine Barysien and Christine (Greg) Webb; three sons, David (Cheryl) Meierhofer, Blair (Charlotte) Meierhofer and Brian (Cassandra) Meierhofer; nineteen grandchildren and thirteen great-grandchildren. He is also survived by his sister Catherine Corbett and sister-in-law Eileen Meierhofer, his only cousin Aurelia (Curtis) Thunstrom, and many nieces and nephews.

This creative, quiet, gentle man will be greatly missed.

Funeral Services will be held at McInnis & Holloway (Fish Creek, 14441 Bannister Road SE, Calgary, AB) on Sunday, January 29, 2023 at 2:00 p.m. Reception to follow in the Hospitality Centre at the Funeral Home. Condolences, memories, and photos may be shared and viewed here.   If friends so desire, memorial tributes may be made directly to the charity of the donor’s choice.

The family would like to thank the staff and Dr. N. Smith for the wonderful care Ernest received at Cambridge Manor.

Share Your Memory of
Ernest
Upload Your Memory View All Memories
Be the first to upload a memory!
Share A Memory
Send Flowers