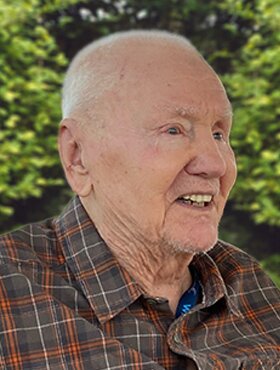 Leo was born in Drumheller, AB on May 22, 1927. He moved to Calgary as a young adult, where he established himself as an accomplished and affable salesperson within the building and supply industry. Never one to remain idle, Leo worked well past typical retirement age, into his late-70s.

Leo had a charismatic personality and could be counted on to lighten the mood with his optimism, his sense of humour and his innate ability to make all those around him feel comfortable and appreciated.

Leo, first and foremost, was a family man. He always put his family first and could be counted on to lend a helping hand or provide words of encouragement when needed. He was an exceptionally hard worker in all areas of his life and lived his life by the mantra, “putting in your best effort is all that can be expected.”

Leo will be most remembered for his ability to strike up a conversation with anyone, and his ability to captivate others with his stories and his punchlines.

A private family service will be held at a later date. Condolences, memories, and photos may be shared and viewed here.

Share Your Memory of
Leon (Leo)
Upload Your Memory View All Memories
Be the first to upload a memory!
Share A Memory
Send Flowers