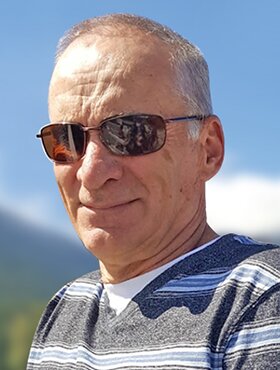 With an abundance of sadness and love, we say goodbye to Philip David Sheepy of Cochrane, AB.  Phil passed away on January 21, 2023, at the age of 67 after a long, courageous battle with glioblastoma and leukemia.

Born on June 28, 1955, to Nora and Cecil Sheepy of Calgary, Phil was the second of their three children. After graduating from high school, Phil obtained his degree from the University of Calgary in physical education. The travel bug then came calling, and he spent over a year exploring the world. On February 14, 1981, Phil married the love of his life, Melody van Weenen. Life blessed them with two beautiful daughters, Nicole and Rawnie. Phil began his career as a letter carrier with Canada Post in 1980. Phil happily retired after 32 years of service.

Phil’s passions included, playing hockey, fly fishing and photography. He enjoyed numerous outdoor activities. He loved being a grandpa and teaching his grandkids his passions and life skills.  Phil’s favorite place was “The Farm” near Vulcan. He spent as much time camping there with his family as he could. It truly was his happy place.

He is survived by his wife of 42 years Melody; his children, Nicole (Geoff) and Rawnie (Brett); his best friend and brother Terry (Deb, and son Jay); sister Dianne (her children, Christy, Gord, Riley); sisters Karen and Karlene; and his beloved grandchildren, Caden, Jordan, Nolan, Carter and Scarlett; and his mother Nora. He is fondly remembered by all his extended family. He is predeceased by his father Cecil.

A Celebration of life will be held on Sunday January 29, 2023, from 1:00 - 4:00 pm in the Hall of Vision, Cochrane RancheHouse, (101 RancheHouse Rd, Cochrane, AB). Condolences, memories, and photos may be shared and viewed here.

Share Your Memory of
Philip
Upload Your Memory View All Memories
Be the first to upload a memory!
Share A Memory
Send Flowers