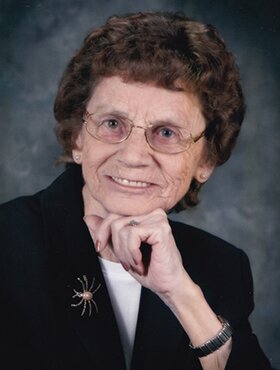 It is with great sadness that we announce the passing of our beloved mom and grandma, who left us to join her husband (Russ Molofy) and parents (Tom and Lucy Stewart), early in the morning on Saturday, January 21, 2023. Those who knew Ethel well will be unsurprised she chose the early morning to depart - she was a night owl at heart who often had late phone conversations with friends, sent emails to her grandkids timestamped in the wee hours of the night, and managed to get in the late night news most evenings.

Born to Canadian parents in Detroit, Michigan at the very start of the Great Depression, Ethel would learn to be resourceful, resilient and independent - habits honed and kept for her entire life. Shortly after her arrival would be that of her sister Phyllis Jean, who she would keep up a very special life-long relationship. Upon reflection, Ethel would often say they were “dirt poor” growing up but even so she maintained very happy memories of her childhood including playing with dolls her mom made and doing puzzles both front and back. She was also a major helper to her mother when little sister Vivian Marie arrived thirteen years later. Phyllis (Don Tuck), and Vivian (Jerry Depner), would be close lifelong companions. There were many trips between Calgary and Edmonton, late nights of cards and games, holiday celebrations and dances. There are no parts of Ethel's life that didn’t include her special sisters.

In the middle of WW2 Ethel and family would move back to Alberta to live in Edmonton, where she attended high school, business school and because of her knack for numbers, started a career at the Dominion Bank where she also met her husband, Russ. Russ and Ethel wed in 1951 and moved to Calgary a few years later. Here they welcomed their only precious child, Sharon Lee, in 1956.

In addition to Sharon (Tom Higgins), she was fortunate to have many, nieces and nephews, cousins and dear friends that made her life rich and full.  Ethel tremendously enjoyed the lives of her grandkids, Holly Marie (Jon Bird), Hillary Paige (Grant Burwash) and Thomas Russell (Carolina Bhering). She was delighted to welcome her two great-grandchildren, Nora Jean Bird and Nellie Mae Bird, the latter who shares the middle name and stubborn disposition of the matriarch we all adored so.

Beyond Ethel's family, her greatest pride and life’s work was being a member of Hillhurst Rebekah Lodge #116. In 1953 she joined the IOOF, the international fraternal order of Odd Fellowship, becoming a Rebekah and entering what would be 70 years of dedication to service. She held every office in the Rebekahs, as well as the Secretary of the Rebekah Assembly of Alberta, District Deputy President and Past President, and finally being awarded the Meritorious Jewel from the Alberta Assembly for her service. Highlights included the annual lodge convention and participating as a leader for the United Nations Pilgrimage for Youth. It was this community that was her lifeblood where she treasured her time week over week, month over month, year over year with people who were like family to her.

When Ethel reflected on her life in her final days, she often used the word “wonderful”, told us all she did the very best she could, and that she was proud of her life. We are proud of her, too. It’s hard to imagine life without her.

A Celebration Service of Ethel’s life will be held at Hillhurst United Church (1227 Kensington Close N.W., Calgary, AB) on Saturday, February 4, 2023, at 11:00 a.m. Private internment to follow. Condolences, memories, and photos may be shared and viewed here.

Share Your Memory of
Ethel
Upload Your Memory View All Memories
Be the first to upload a memory!
Share A Memory