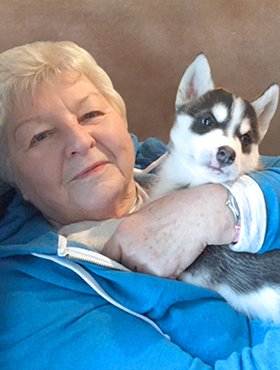 Morna was born in Winnipeg, MB on June 15, 1934 to Olga and Roy Shilling. While her early years were not easy, her childhood memories were warm and enduring ones of hunting prairie chickens with her Dad, trips by horse and buggy and times with her many cousins.

In 1953 she fell for a guy, Don Murray, she was training at her job with the Dominion Bank.   When Don moved back to Toronto they continued their relationship, despite the long distance. He came back to Winnipeg for Christmas 1955 and proposed to her. She didn’t see him again till three days before their wedding on September 5, 1956.

The very next day, Don and Morna moved to Toronto where they lived and raised their children, Karen (b.1964) and Jim (b.1969) until they moved to Edmonton in 1975. In 1976 they moved to Calgary. Don passed in October of 1996. Morna continued to live in their home in Parkland with their beloved Belgian Shepherd, Arnie until his passing in 2007. In 2008 she moved to her much loved villa in Okotoks, where she staunchly remained till her death.

Morna led an active life. The family skied, curled and took many trips to the mountains. Her children were her biggest passion; and they knew it everyday of their lives. Chasing her daughter around meant that she rode horses, dogsleds, ATVs and motorcycles at various times; despite her fear of heights and speed!  She was an avid music fan due to her son’s skill as a trumpet player and attended every performance of his she possibly could through the years.
She was a prolific volunteer at her local Seniors Centre and loved helping out the Seniors - which she never considered herself one of.

Morna is survived by her daughter, Karen Ramstead and son in law, Mark Ramstead of Red Deer County, Alberta; and son Jim Murray and daughter in law Leanne Paisley of Calgary.
Sadly, she had no grandchildren, but she embraced her many four legged grandchildren over the years. She is also survived by a great many friends. The family would like to specially acknowledge her dear friend Judy Pohl, who was a true blessing throughout Mom’s final days and was at her bedside when she passed.

Morna was predeceased by her husband, Donald Murray in 1996 and her brother, Art Shilling of Seattle, Washington in 2003.

Morna ashes, along with the ashes of her and Don’s dog, Arnie; and her brother Art with be interred next to Don in the upcoming days.

A private gathering will be held at a later date in Okotoks.  Condolences may be forwarded through www.McInnisandHolloway.com. If friends so desire, memorial tributes may be made directly to the Heart & Stroke Foundation of Alberta, 200, 119 – 14th Street N.W., Calgary, AB T2N 1Z6 Telephone: (403) 264-5549, www.heartandstroke.ca.

Services for Morna MURRAY
There are no events scheduled. You can still show your support by sending flowers directly to the family, or planting a memorial tree in memory of Morna MURRAY.
Visit the Tribute Store

Share Your Memory of
Morna
Upload Your Memory View All Memories
Be the first to upload a memory!
Share A Memory
Send Flowers