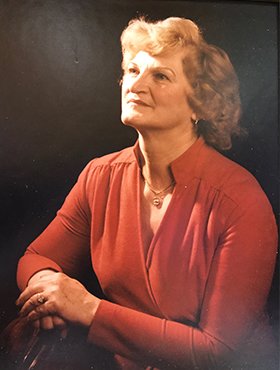 Marian was born in Edmonton, AB on May 1, 1922. She was raised in Newcastle and Drumheller by her mother, Bessie Benny. Marian moved to Calgary in her early twenties to attend secretarial college. She met Harry and they married in November, 1946, and remained married for over fifty years. Marian accomplished much during her life and was particularly proud of her children and their accomplishments. Marian worked for the government for most of her career, first in the Post Office and then in Agriculture. Returning home from work one day she was struck by a car, and that changed her life from then on. Marian had many interests, especially Ukrainian cultural activities. She loved to garden and to dance. She will be most remembered for her love of family.

Marian is survived by her two children, Gregory and Kathleen (Kathie); her grandson Sasha, as well as numerous nieces, nephews, cousins, and friends. She was predeceased by her husband Harry, her brother Mac (Mike), and her mother Bessie. She was also predeceased by her brothers-in-law and sisters-in-law, John and Alice, Peter and Jean, Virginia and Harris, Walter and Evelyn, and Paul; and half-sisters and brothers Molly and Jerry, Vicky, and Sam.

Funeral Services will be held at McINNIS & HOLLOWAY (Fish Creek, 14441 Bannister Road SE, Calgary, AB) on Thursday, January 9, 2020 at 2:00 p.m. Reception to follow in the Hospitality Centre at the Funeral Home. Condolences, memories and photos may be shared and viewed on Marian’s obituary at www.McInnisandHolloway.com.