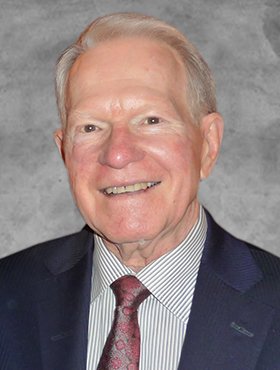 It is with profound sadness that we announce the passing of Harold Lemieux after a long, brave battle with kidney cancer, on Monday, March 9, 2020.

He was raised in Old Wives, SK. He attended Central Collegiate High School in Moose Jaw and studied at the University of Saskatchewan. He graduated from the U of S in 1969 with degrees in Arts, Commerce and Law. At the U of S he met the love of his life, Elaine Welsh. They wed in 1968. He articled with a law ﬁrm in Moose Jaw and became partner. In 1972 he and Elaine moved to Calgary after he decided private practice was not for him and accepted a position at Shell Canada. At Shell he enjoyed a thirty-two year career. He ﬁnished his career as Vice President and General Counsel. He was an active member of the Association of Canadian General Counsel. In his more than three decades of service at Shell, Harold made many lifelong friends in addition to completing a successful career. After retirement, Harold enjoyed his time on the board of the Connect Charter School. He loved telling stories, listening to country music, barbecuing, making his Christmas caramels and savouring a glass of wine. He also enjoyed travelling around the world with Elaine and friends. They visited five continents, especially loving the walking trips in Italy and France, exploring New York City, and touring Vietnam.

The Celebration of Harold’s Life will be held at McInnis & Holloway (Park Memorial, 5008 Elbow Drive SW, Calgary, AB) on Saturday, July 9, 2022 at 2:00 p.m. Reception to follow in the Hospitality Centre at the Funeral Home. Condolences, memories and photos may be shared and viewed here.

We wish to extend our deepest thanks to Dr. Daniel Heng and his staﬀ at the Tom Baker Cancer Centre for their five years of exceptional care. In lieu of ﬂowers, if friends so desire, memorial tributes in Harold’s honour can be made to the Boys and Girls Club of Calgary https://www.boysandgirlsclubsofcalgary.ca/donate/, the Calgary Women’s Emergency Shelter, https://www.calgarywomensshelter.com/, to the Mustard Seed Street Ministry, www.theseed.ca or to the charity of your choice.

Share Your Memory of
Harold
Upload Your Memory View All Memories
Be the first to upload a memory!
Share A Memory
Send Flowers