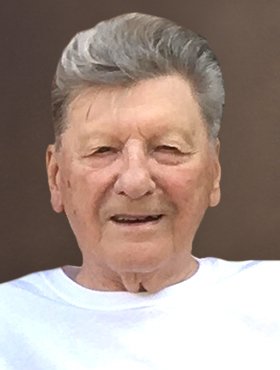 It is with deep sadness that we announce the passing of our husband, father, grandfather and great-grandfather Norman George Osmar, at the age of 91 at his residence in Calgary, AB, on Wednesday, April 8, 2020.

Norman was born June 7, 1928 in Port Arthur, Ontario. At the age of twenty-three, he married his sweet love Elsie, and together they shared sixty-eight years of marriage, blessed with the devotion of their three sons.

Norman enjoyed an exemplary career as a long-haul driver, most notably with Patricia Transport and Bulk Carriers in Thunder Bay, Ontario and, after embarking on a new family adventure in the West, Canadian Freightways in Calgary, Alberta. Norman proudly was inducted into the Mack Truck Corporation’s Million Mile Club and his name is engraved on the Mack Bulldog Statue in Allentown, PA. He was also a member of the Canadian Freightways’ Million Mile Safe Driving Club and winner of the Manitoba Truck Rodeo; all accomplishments of great pride to Norman.

Upon retirement, Norman took his bride back to their beloved Pearl, Ontario, returning them to the land of ice-fishing, wood-splitting, partridge hunting, and cherished family roots. When his hands weren’t on the wheel, Norman was most at home with boots firmly planted on the rural soil of Northern Ontario.

With profound dedication and passion, Norman achieved his full heart’s desire in his lifetime…a loving and devoted marriage to Elsie, great pride in his sons’ families and careers, abundant memories of the many miles he drove and the people he met, and an enduring affection for the North Shore of Lake Superior.

Relatives and friends are invited to a Visitation at McINNIS & HOLLOWAY (Park Memorial, 5008 Elbow Drive SW, Calgary, AB) on Thursday, April 16, 2020 from 4:00 to 6:00 p.m. Interment to follow at a future date at Riverside Cemetery in Thunder Bay, Ontario. If friends so desire, memorial tributes may be made directly to the charity of the donor’s choice.

If friends so desire, memorial tributes may be made directly to the charity of the donor’s choice.

Share Your Memory of
Norman (Oz)
Upload Your Memory View All Memories
Be the first to upload a memory!
Share A Memory
Send Flowers