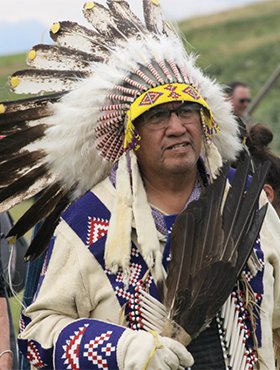 It is with great sadness that we announce the unexpected passing of our dear and beloved husband, father, brother, grandpa, and great-grandpa, Ricky Mark Poucette on Thursday, April 9, 2020 at the age of 61 years.

Ricky was born and raised in Morley and completed his education in Morley. He was taught his traditional teachings knowing that Wa-Ka is one of his skills as well as keeping the important cultural traditions and activities.

Ricky was a heavy equipment operator for many years. He was a Nakoda Nation singer as well as a round dance singer, starting in the late 80s to 90s and still singing occasionally later in life.

Ricky was a pony chuck wagon driver for three years, winning both Best Dressed Chuck Wagon and Rookie of the Year in 1989. He was also a teepee owner at the Calgary Stampede and a team roper in the 80s and 90s. Ricky was a buckskin champion dancer. In 2019, he qualified for a spotlight competition at the Kamloops Pow-Wow.

He comes from a big family with numerous nieces, nephews and great-nieces and great-nephews. Ricky also has lots of adopted families in Arizona, Onion Lake, Loon Lake, Little Pine Poundmakers, and numerous adopted families from four directions: Holloway, Snow, Labelle, Dixon, Lefthand, Wesley, Kaquitts, Marks, Benjamins, and some extended family from Brocket and Standoff. We apologize if we have missed anyone.

Wake Services will be held at the Residence of Frances and the late Ricky Poucette (Morley, AB) on Wednesday, April 15, 2020 and Thursday, April 16, 2020.

Funeral Services will be held at the Residence of Frances and the late Ricky Poucette (Morley, AB) on Friday, April 17, 2020 at 1:00 p.m.  Graveside Service to follow at Wesley Cemetery. Condolences, memories and photos may be shared and viewed on Ricky’s obituary at www.McInnisandHolloway.com. The family would like to thank the Morley Home Care, the Foothills Medical Centre and the Rockyview General Hospital for their care and compassion.

Share Your Memory of
Ricky
Upload Your Memory View All Memories
Be the first to upload a memory!
Share A Memory
Send Flowers