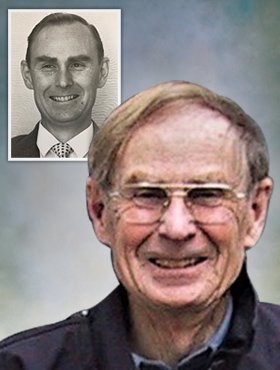 In lieu of flowers, donations may be made to an animal rescue centre in Pincher Creek that he was very fond of and made many donations to over the years. It was called A Better Chance Animal Rescue and donations can be made in Grant’s name by visiting the website http://www.abetterchanceanimalrescue.com/get-involved/donate/

It is with great sadness that we announce that Grant Wilson Fawcett, our beloved Father, passed away from symptoms related to COVID-19 on Friday April 17, 2020. After declining health in recent months, his time had come.

Our Dad was born in 1928 in Hamilton, Ontario and grew up as a young boy during the Depression. When WWII broke out, he saw many of the older boys in the neighborhood head off for battle, including his older brother Bob who was in the Navy. Although Grant was too young to enlist, he always had profound memories of the news reports and continuing developments of the war. Our Dad graduated from McMaster University with a degree in Physics in 1952. He then went on to have a storied career working as a Geophysicist first with B/A (British American Oil) and then Gulf Oil. During his life-long career with this company, he travelled and lived in Pittsburgh, Innisfail, Edmonton, Regina and Calgary. After a distinguished 31year he retired from Gulf Oil in 1986 and spent much of the remainder of his life tending to his beloved ranch near Twin Butte and Waterton, Alberta.

Our Dad is remembered by us as having a fun sense of humor and we enjoyed hearing his witty jokes whenever we got together. He loved meeting strangers during our travels and he easily struck up friendships with people we met whom enjoyed his friendliness and levity. Whenever we travelled together, he would often point on geological features in the area we were in. We grew up with our Dad with a shared love of hiking, skiing, skating, playing football, camping and fishing. Grant was particularly fond of his canine friends and one of his favourite pastimes was going for long walks with his four-legged pals either at this ranch or around Calgary.

For his personal hobbies, our Dad had an interest in Ham short-wave radio operation and loved to connect with people around the world using this. He also was a member of the Glencoe Club and was an avid participant in the Men’s tennis ladder there for years. For a brief while, our Dad was a skiing instructor at Rabbit Hill near Edmonton. One of his favourite pastimes was spending time with his best friend and College roommate, Sam Nablo. When the two of them got together they would regale themselves with endless tales and personality impressions; generating much laughter amongst themselves.

Condolences, memories and photos may be shared and viewed on Grant’s obituary at www.McInnisandHolloway.com.

The family of Grant Fawcett  created a memorial video which can be viewed at https://www.youtube.com/watch?v=RBgVDd5idbs

In lieu of flowers, donations may be made to an animal rescue centre in Pincher Creek that he was very fond of and made many donations to over the years. It was called A Better Chance Animal Rescue and donations can be made in Grant’s name by visiting the website http://www.abetterchanceanimalrescue.com/get-involved/donate/

Grant Wilson believed and lived many of life’s passions. Here are a few that I will share:

Dad was a big believer in mans best friend. Many considered him to be the true dog whisperer until they discovered that he always had amazing liver dog snacks in his jacket pocket. Of course the dogs would smell his nice snacks! His first dog was a Border Collie named Tess. This dog was highly intelligent and loved to fetch tennis balls. Dad had a special plastic throwing device to help him launch tennis balls a great distance. Tess never tired out. His second and third dogs were my dogs that Dad adopted. I was transferred to Houston from Calgary in 1994 and I took my dogs Tolstoy (Siberian Husky) and Mogli (160 Lb Giant Alaskan Malamute) with me.  After a couple of months I found I was travelling every other week on business and it was obvious that I could not keep them. I flew Dad down to Houston for a week to look after them and at the end of the week we had a candid conversation that the dogs needed to be back in Calgary. He agreed and he offered to take care of them. At first, he found the dogs a bit of a burden but after a couple of months life became about the dogs. He would take them to the River Park off leash area (we called the Dog Walk Park) every day and this got him out of the house to meet hundreds of people that became his new friends.

Dad became a celebrity at River Park. He would post poems under the guise of Edgar Allen Poo. The massive size of Mogli was a draw for many. The odd time a dog would pick on Tolstoy or a couple of dogs would start fighting, Mogli would come into the mix with an incredibly deep and powerful “woof” and all dogs would scatter. Dad was a dog diplomat, but he also had the gentle giant as an enforcer when needed. When Tess, Darcy (another Border Collie he had), Tolstoy and Mogli passed Dad adopted the most adorable dog named Bella. Bella was a rescue dog from Pincher Creek and looked like a cross between a Welsh Corgi and a Siberian Husky. Bella had super short legs and the beautiful Husky face. Tess stayed with Dad until Dad had to go to a senior’s home. A kind family that had a dog that loved Bella adopted Bella. Grant’s mission as the amazing dog whisperer and the elusive Edgar Allen Poo made many a person and many a dog incredibly happy.

Dad Believed in Sports and Exercise: Dad had us doing something every weekend. In the summer we hiked the hundreds of amazing hikes in the Canadian Rockies. In the winter we would go skiing (cross country and downhill). During the week Dad would be busy with work and tennis. He was a big believer that ”A rolling stone gathers no moss”, and  had us kids involved as much as possible. He was a true inspiration for exercise and health.

Dad Believed in Having a Hobby: Grant had a dream and passion to have a farm. He built two hobby farms down in Southern Alberta. The first was Box A (named because the house was shaped like a small box placed on 4 cement posts) and Box B (named because it was shaped like a multistory box). Box A was in Hillspring and Box B was just north of the Waterton Park Gates. On each hobby farm he built by hand the buildings with the help of neighbors, myself, and the local Hutterites. I spend hundreds of weekends down in Southern Alberta learning from Dad many skills like: installing & taping wallboard, electrical wiring, plumbing, planting hedges, plowing fields, setting up and fixing barb wire fences, planting crops, shingling roofs, and installing insulation. The thousands of hours spent with him on all these hobby farm excursions as a young man inspired me to always have a hobby or something to do to keep me busy in life.

Dad Believed in Adventure: In addition to the hundreds of mountain hikes that he took us on he would be there to take on a road trip. On these road trips he would indoctrinate us on his favorite music ranging from Motzart to the Rolling Stones, Doors, Bread, Led Zepplin, etc.  When I was 15 I had a passion for the gold rush and gold panning. Dad took me to the interior of BC to the Barkerville historic ghost town and mining museums. He would point out the geology to me on the trips we would take. He ignited my passion in geology that I later studied in university. He was always there to answer those complex questions a youngster has on these trips: how were the mountains formed, what happened to cause the extinction of the dinosaurs, and why was there an ice age? I never found gold but Dad was there for me as we stopped at stream after stream for me to find no gold except the gold in his heart.

I love you Dad. Rest in peace in heaven! Love, Scott andFamily

Share Your Memory of
Grant
Upload Your Memory View All Memories
Be the first to upload a memory!