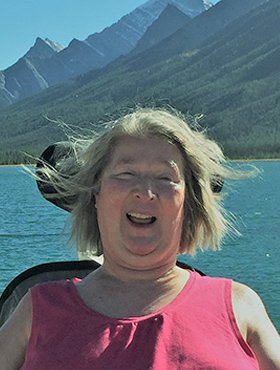 Laurie Heule of Calgary, AB, passed away suddenly, but peacefully, at her home on Friday, April 17, 2020 of natural causes, related to her long standing battle against Multiple Sclerosis.

We are grateful for the gentleness of Laurie’s passing and appreciate that her struggles are over. Laurie managed her illness in a brave and courageous manner. She always maintained a positive attitude in her final years and was an inspiration to many.

She will be missed by many friends from her school/university days and her work, but none more so than by her caregiver/constant companion of the past twelve years, Gloria Canonigo (Tony) of Calgary.

Born in Toronto, Laurie grew up in Edmonton, Alberta, graduating from Ross Sheppard Composite High School (1975) and from the University of Alberta’s Faculty of Pharmacy (1979). She worked as both a pharmacist in Calgary, London, Ontario and Vancouver, B.C. and as a clinical pharmacist within hospitals in Calgary, specializing in infectious diseases. She contributed to two published papers on that subject. Her career was cut short when Laurie, diagnosed with multiple sclerosis in her late 20’s, had to go onto long term disability leave with her deteriorating physical condition.

During her teens, 20’s and 30’s, Laurie enjoyed the great outdoors, with pursuits in skiing, backpacking, canoeing along with brother Mike and friends. She was a volunteer ski patrol at Fernie in the 1980’s and enjoyed trips to ski powder in Utah as well. She had a love of good food and guests were always welcomed in her home. She had a "green thumb" for gardening, with flowers and tomatoes on her deck.

Laurie’s struggles with MS eventually curtailed her ability to spend time outdoors, as she became reliant on crutches and then a wheelchair and was ultimately confined to her home, bed and wheelchair bound. She used her pharmaceutical background extensively in working with her doctors to alleviate the nerve pain and spasticity associated with the disease. Despite these struggles in the face of adversity, Laurie maintained a very positive attitude towards Life and was always smiling, laughing and giggling with Gloria during the latter years of her life. She was fortunate to have departed this world on her own terms, from her own home and bed, without pain or suffering, with Gloria by her side.

Special thanks to Doctors Scotland and Rimmer for their care and attention in Laurie’s latter years and to Gloria and the many individual caregivers that assisted Laurie in her homecare. She was very thankful for all of your assistance.

Due to the physical distancing restrictions of the current pandemic, a Celebration of Laurie’s life will be postponed until possibly the fall of 2020 or the spring of 2021. Stay Healthy until then! Condolences, memories and photos may be shared and viewed on Laurie’s obituary at www.McInnisandHolloway.com.

Share Your Memory of
Laurie
Upload Your Memory View All Memories
Be the first to upload a memory!
Share A Memory
Send Flowers