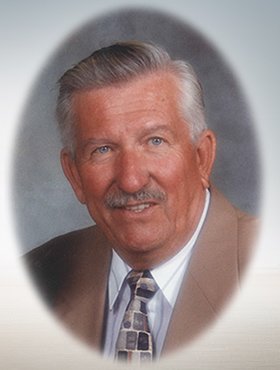 Ronald Kletke of Calgary, AB, passed away at the Chinook Care Centre on Wednesday, April 22, 2020 at the age of 88 years from COVID-19.

Ron and Linda have celebrated sixty-six years of marriage, and over the years, they have been fortunate to have travelled around the world. They have also enjoyed many fun times as snowbirds in Mesa, Arizona and Penticton, BC.

Ron had always been considered a very lucky man. From winning at the slot machines in Vegas, achieving fame and fortune by cracking the code to a scratch and win contest in the late 60’s with “Casino Cigarettes”,  pulling through an aortic aneurysm in ‘88, to surviving a serious car accident without a scratch in 2003, his luck has allowed him to have a very fulfilling and prosperous life.

In 1961, Ron and Linda became founding members of the Lutheran Church of the Cross in Calgary and Ron played an integral part in the naming of the church.  As active members, they have volunteered and supported the church over the years in various capacities, developing lifelong friendships.

One of Ron’s greatest loves was music, from his early days as a Barbershopper with the Stampede City Chorus, to many years of performing with his best friend and fellow music partner, Bill Volk, in the group “The Organdstrings”, Ron entertained thousands of people over the years with his wonderful tenor voice and masterful keyboard playing.

In the late 50’s, Ron moved the family from Winnipeg to Calgary to further his career in the printing industry and in 1963, along with his father, Ron Sr., they purchased Oil City Press becoming one of Ron’s major legacies. Now in its 4th generation, Oil City Press continues to flourish, run by his sons, Doug and Dave; and his granddaughter, Pam. Ron was always so proud of all the accomplishments and successes that OCP has achieved over the years.

We look forward to honoring Ron in a celebration of his life at a later date. Condolences, memories and photos may be shared and viewed on Ronald’s obituary at www.McInnisandHolloway.com. If friends so desire, memorial tributes may be made directly to the Alberta Children’s Hospital Foundation, 28 Oki Drive NW, Calgary, AB  T3B 6A8, Telephone: (403) 955.8818. www.childrenshospital.ab.ca Or to The Lutheran Church of the Cross, 10620 Elbow Drive SW Calgary, AB, T2W 1G4 Telephone: (403) 255.4792. www.churchofthecross.ca/

We would like to thank all of the wonderful staff at the Chinook Care Centre, Richards Way and  Dr. Carolyn Wong for providing Ron with the utmost care and attention during these unprecedented times.