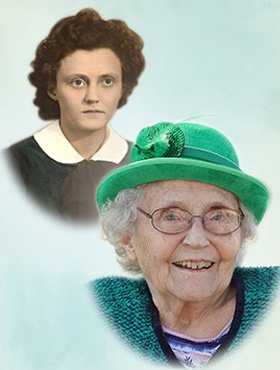 It is with great sadness that we announce the passing of our mother, Bernadette Hagel, on Tuesday, April 28, 2020, at the young age of 95 years.

The world has lost a beautiful soul. Mom brought song and laughter to those around her. Her kind and gentle manner, her ability to see the good in others, and her wicked sense of humour may well have been the reason God kept her around for as long as he did.

Bernadette trained as a school teacher and taught for two years at Castor and Beiseker. It was during her year in Beiseker that she met her future husband, Jake Hagel, who had just returned from the war. The two married in 1946 and settled on a farm in the Beiseker area. Together they raised ten children; each child she said was a gift from God.

Mom loved to read and do crossword puzzles. Photography was one of her passions, her camera accompanying her everywhere. Mom stayed connected with distant relatives by writing letters and phoning. Dad complained about the phone bills but family was her top priority.

Later in life she travelled around the world, accompanied by her children, grandchildren and friends. Mom was infatuated with her family history long before it became fashionable. She visited her mother’s native land, Ireland on three different occasions, each time connecting with relatives.

We would like to extend our thanks to Dr. McSorely and the wonderful staff at the Bethany Care Centre, Airdrie who looked after our mother for many years.

Due to the Coronavirus outbreak there will be a private funeral mass for immediate family only.  A Celebration of Mom’s life will be held at a later date. Condolences, memories and photos may be shared and viewed on Bernadette’s obituary at www.McInnisandHolloway.com.

Share Your Memory of
Bernadette
Upload Your Memory View All Memories
Be the first to upload a memory!
Share A Memory
Send Flowers