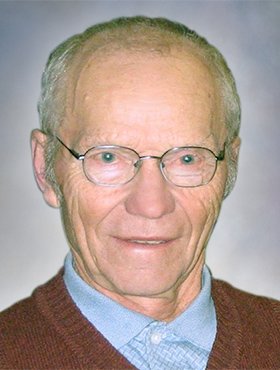 We are saddened to announce the passing of Jim Kucharski on Wednesday, April 29, 2020 at the age of 86 years. Jim was a kind and gentle person, with a quiet strength and an unexpected sense of humour. Born in Zulin Poland on December 28,1933, he was the seventh of nine children. When he was six years old, the second World War broke out, and the family was torn apart. Jim’s strength was evident as he survived starvation, malaria, typhoid and became an orphan. In 1942, as part of the allied agreement, Polish prisoners were released from Russia.  Jim ended up in an orphanage in India until 1948.  Most of Jim’s early memories came from his time in India. He would tell stories of running barefoot, sneaking into the movies and encountering cobras. Afterwards, he spent some time in England with his siblings Stanley, John, Carol and Czesia. In England, he was accepted in a Polish school and excelled in a variety of sports including shotput where he became the junior shotput champion of the country. Wanting to be with family, Jim followed his siblings Carol, John and Czesia to Canada. In 1953, Jim moved to Prince Albert, Saskatchewan where he helped his sister Carol and her husband Martin on their farm. He moved to Calgary and got involved with the Polish Dance group and played soccer for the White Eagles. He shared his love for dance in Australia, while he spent a short period of time there with his sister Stefa. Upon his return, he continued with the dance group as a teacher. In his later years, he joined a senior dance group.

Jim moved to Calgary in his early twenties.  He worked at Canada Packers where he began to learn about making sausage. Later, the sausage he made became legendary to all his family and friends. In 1960, he met his beloved wife, Marcella, on a group date.  They got married on April 20th, 1963 and had five children. Jim worked hard to provide for his family during this time.  For many years he worked as a draftsman and eventually owned a grounds maintenance company.  Their home was busy, and Jim’s love for family, was evident as extended family was always welcomed. He often reached out to his nieces and nephews which has always helped to maintain family connections.

He was competitive and modelled sportsmanship, as long as he won! Activities he enjoyed over the years included soccer, tennis, curling, bowling, fishing, golf, pool, table tennis, dancing and of course a good game of cards.

Although Jim struggled the last couple of years with dementia, he maintained his humour and was able to express his pride and love for his family.

Prayers and Funeral Mass will be held later this week for the immediate family with a Celebration of Life to be scheduled at a later date when family and friends can be together to hug and share memories of Jim. In lieu of flowers, donations can be made to Calgary Health Trust, Stars Air Ambulance or a charity of one’s choice. Condolences, memories and photos may be shared and viewed on Jim’s obituary at www.McInnisandHolloway.com.

Share Your Memory of
Zdzislaw
Upload Your Memory View All Memories
Be the first to upload a memory!
Share A Memory
Send Flowers