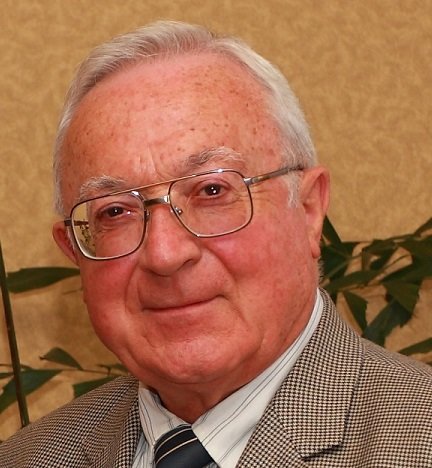 Peter Krueger was born on a family farm near Altona, MB, to Jacob J. Krueger and Elisabeth Friesen, descendants of Mennonite immigrants from Russia who settled southern Manitoba beginning in the 1870s.

Peter completed high school at the Mennonite Collegiate Institute in Gretna, MB.  He attended the University of Manitoba on scholarship, completing both a B.Sc. and an M.Sc. in Chemistry.  As a Shell Commonwealth Scholar at Oxford University (St. John’s College), he completed a D.Phil. degree in infrared spectroscopy.  Following a Postdoctoral Fellowship at the National Research Council laboratories in Ottawa, he and Dorothy Isabel Lashley were married in 1959 and they moved to Calgary where Peter began an appointment as Assistant Professor of Chemistry at the then, Calgary Branch of the University of Alberta.

When the University of Calgary was established in 1966, he was appointed Professor and founding Head of the Department of Chemistry. Numerous scientific publications and conference presentations led to the early international recognition of his research, and he was the first Canadian to receive the Coblentz Award in Spectroscopy in 1967, followed by an Alberta Award of Excellence, and the inaugural Herzberg Award in Spectroscopy from what is now the Canadian Society for Analytical Sciences and Spectroscopy.   He was elected a Fellow of the Chemical Institute of Canada and of the Royal Society for Chemistry in the UK.  He served on the editorial advisory board of several scientific journals, and on national scholarship selection committees. Many administrative appointments followed and they greatly curtailed his teaching and research career; he was Vice-Dean of the Faculty of Arts and Science, Member of the Board of Governors representing the academic staff, and Vice-President (Academic) and Provost for three Presidents over the 14-year period 1976-90.  As the senior vice-president, he provided academic leadership to the University of Calgary during this formative period of rapid program development and enrolment growth.  This was recognized when he was named to the Order of the University of Calgary.

In post-retirement Peter served on the Private Colleges Accreditation Board for the Government of Alberta for six years, most of this time as Board Chair; and as Academic-in-Residence in the International Centre at the University of Calgary.  As Emeritus Professor he also assisted Research Services in the review of major research grant applications.  His formal association with the University of Calgary totaled 42 years.

Dr. Krueger possessed a wonderful combination of scholarly talent, passion for teaching, and administrative skill.  At work and at home, he had a reputation for giving sage advice.  He was kind and generous to his family and friends, devoted to his wife, and faithful to God.  We rejoice that he and Dorothy are now reunited at the heavenly banqueting table.

Left to mourn and cherish his memory are his sisters, Elisabeth Krueger, Linda (Dave) Boschmann and Elma (Ernest) Hiebert;  daughters, Kathryn  (Grant) Lockhart,  Vivian Krueger, and son Jonathan Krueger (Marcela); grandchildren Miranda Lockhart, Fiona Lockhart, Emma Rojo Krueger and Alexander Rojo Krueger, and a number of cousins, nephews and nieces. He was predeceased by both parents and by his wife Dorothy in 2018.

A memorial service will be held in Calgary at a later date, to be announced. Condolences, memories and photos may be shared and viewed on Peter’s obituary at www.McInnisandHolloway.com.