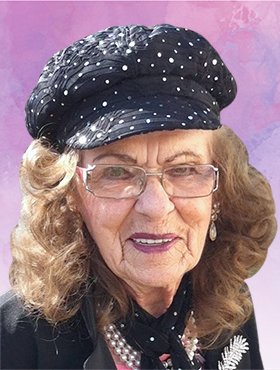 The world is less bright without the spirit, stories and laughter of Margaret Langston. She was never seen without a little sparkle, a touch of lipstick, lovely hair and, of course, wearing purple.

Margaret left this life as she entered it – living to the fullest in spite of many challenges. Growing up the oldest living child of Romanian settlers in the Boian area of Alberta, her young life was difficult, loaded with responsibility and hard work. A tenacious nature led her to impress her mother with a natural talent for sewing. With courage and curiosity, she left the homestead and made her way to Edmonton at age 16, where she honed her skills, becoming a talented professional seamstress.

She met her beau, Leslie Langston, at a post-war dance in Calgary. It was never certain who chose whom but it is not disputed that he was “the one”. They married October 5, 1946, and built a family home in Acadia where they lived for over sixty years. While raising two young children, Greg and Gail, Margaret took on sewing projects to earn extra money (secretly) for driving lessons. She packed up her young children to deliver her goods across the city several times a week to do so. From the moment she became licenced, driving was a proud joy she loved until her 90s.

Her musician father, who travelled to weddings and funerals across the Alberta prairies, sparked her love of melody. She was always seen humming, tapping her toes, playing the spoons, and eventually line dancing.  She was part of line dancing groups for three decades, often performing in Calgary Stampede events and at Ranchman’s Friday afternoons.

“Always keep moving” was one of Margaret’s mottos, which she lived up to in every way. She was an avid golfer, even gaining a coveted hole-in-one at a Maple Ridge golf course at age 75. She was a ten-pin bowler. She was a fantastic backyard picnic party thrower, baker and cook of many family meals and celebrations. She was a brilliant gardener, crocheter and knitter, and bird lover. She owned budgies for many years, including her beloved Cricket. And, she was a lover of travel. Most notably, in her 80s, she enjoyed a trip to Italy, zip-lined in Costa Rica, and checked off bucket list cruises to Alaska and the Antarctic.

Although Margaret did many interesting things, her life was truly about whom she loved.  She was comforting and loving to her many friends and family, and she was vibrant and indomitable. This made it seem like she might live forever. It is with immense sadness that she could not. And it is with immense gratitude she has shown us how to live with courage, strength and fiery spirit.

Condolences, memories and photos may be shared and viewed on Margaret’s obituary at www.McInnisandHolloway.com.

The family wishes to extend the deepest gratitude to the staff at Tudor Manor in Okotoks, AB.