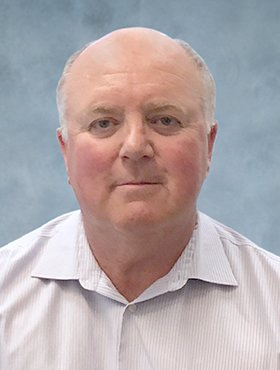 Paul Peters, beloved husband of Jane Peters (nee Caza) of Calgary, passed away on Wednesday, May 20, 2020 at the age of 60 years.

Paul was born on May 6, 1960 in Charlottetown, PEI.  He graduated from Colonel Grey High School.

Paul's love and support for his wife Jane of 38 years, was like no other; anyone who knows Paul knows he would go to the end of the earth for her. His biggest passion in life was his children, grandchildren and pups. He also loved getting up to the lake on weekends and for long periods during the summer, where he could go regular and ice fishing, tend to his big vegetable garden and relax with his wife Jane.

One of the best days in Paul's life was seeing his oldest daughter (Tracey) get married to the love of her life and have two beautiful granddaughters, Chloe and Talia. He was constantly proud to see his son Jeff grow into the man he is today with all of his accomplishments and especially completing his Heavy Duty Mechanics ticket. His youngest daughter (Jamey) is following in his footsteps within the oil industry and he was so proud of the own name she is making for herself and outside of work that she was able to find her future husband as well.

Paul’s career in oil & gas started in the manufacturing side of valves but with his move to Distribution and advancements in his career was where he really grew his reputation and made a name for himself in the industry.

In his younger years, Paul played many sports but was especially keen on hockey and basketball. As he and Jane started their family, he was very heavily involved in coaching his kids in their many sports and reffing basketball. In more recent times you could find him cheering on his granddaughters in their sports, watching basketball at the University of Calgary or playing golf with his many friends and colleagues.

Through work Paul was able to have some very memorable experiences. Some of his favourites would be attending the Masters in Augusta, multiple fishing trips in Northern BC and the opportunities to see multiple high level sports games while traveling throughout the US. In his personal life he was able to complete the West Coast Trail Hike as well as make multiple trips back to visit his family, with his family, in PEI. The most memorable of these being able to celebrate his father‘s (Leonard) 90th birthday in 2011. Another highlight that would have definitely been added to this list is the March Madness Trip next year that family and friends had gifted to him for his 60th birthday.

Paul will be remembered for being the most genuine and caring man you would ever have the pleasure of meeting.

Besides his loving wife Jane, Paul is survived by his son Jeff Peters; two daughters, Tracey (Rod) Pizarro and Jamey Peters (Reid Penner); and two granddaughters, Chloe and Talia Pizarro, all of Calgary. Paul is also survived by his three brothers, Brian (Cathie) Peters of Kamloops, BC, John (Cathy) of Charlottetown, PEI and Gord (Rena) Peters of Ottawa, ON; his sister Joyce (Mike) Carmichael of Albany, PEI; two brothers-in-law, Bernie Totten of Masstown, NS and Brent Spencer of Fredericton, NB; as well as numerous extended family and friends.

Paul was predeceased by his parents, Leonard and Vera Peters; two sisters, Judy Totten and Brenda Spencer; and his dogs Duke and Gus.

A Celebration of Paul’s Life will be held at a later date. If friends so desire, memorial tributes may be made directly to Canadian Tire Jumpstart Charities at  www.jumpstart.canadiantire.ca.

Condolences, memories and photos may be shared and viewed on Paul’s obituary at www.McInnisandHolloway.com.

Thank you to all family, friends and co-workers for your love and support over the years and especially during this incredibly tough time.