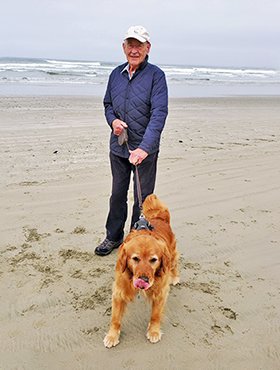 Maurice passed away peacefully at the Rocky View Hospital in Calgary. Amazingly, he had walked past the hospital with Geo only a few hours prior to his passing.

He is survived by their two sons, David (Betty Tod) and Stuart; and their 5 grandchildren, Cahley, Bryn, Graeme, Molly and Rebecca.

Maurice was born in London on June 6th, 1927, and had an older brother Norman (sons Chris and David). Following the war, Maurice left for Canada with his best friend and school chum Stuart Rogers. Soon after arriving in Canada, he and Stuart both took up engineering posts with ESSO in Sarnia, ON. He met his future wife Bernice Gordon through a fellow ESSO engineer and they were married in 1958. They moved to Calgary with the expansion of the oil industry and in 1960 his new Corvette had to go with the arrival of David. Thus began his 50-year relationship with Rolls Royce cars. Bernice and Maurice moved back to Calgary in 1986 and took up residence in Eagle Ridge, where they were blessed with the finest neighbours one could imagine. Very few neighbours were not greeted by Bernice and Maurice on their daily walks with their golden retrievers - first Keith, Max and now Geo.  Life never once slowed Maurice down and in the past 10 years he has been a leading community activist, a member of the Board of the local Rolls Royce Owner Club, and a supportive grandfather.

A celebration of life for Maurice will be held later this summer. If friends so desire, memorial tributes may be made in Maurice’s name directly to Humane Society of Canada, https://www.canadahelps.org/en/charities/humane-society-of-canada-foundation/. Condolences, memories and photos may be shared and viewed on Maurice’s obituary at www.McInnisandHolloway.com.

Share Your Memory of
Maurice
Upload Your Memory View All Memories
Be the first to upload a memory!
Share A Memory
Send Flowers