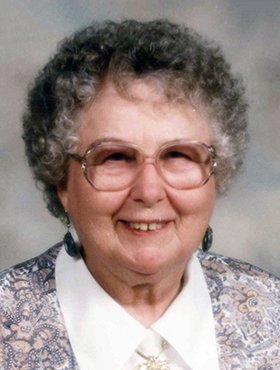 Regina was born in Prelate, SK, to John and Valeria Steiert who had emigrated from Krasna, Bessarabia, Russia in 1910. Two young girls died on the trip and were buried on Ellis Island, New York. Life on the farm during the 1930s was very difficult. Regina at the age of 14, went to St. Angela’s Convent in Prelate to complete high school. She became an Ursuline Nun and taught in Saskatchewan for twenty years.

In 1967 she reached a landmark decision in her life. She left the Ursuline order and moved to Calgary where she taught for another fifteen years. In 1969 she met Joe Burnell. They became good friends and they eventually married in 1971. The years with Joe, the love of her life, were the happiest years for Regina. They were a unit and Joe’s sense of humor and kindness gave her much joy and contentment. They bought a motor home and travelled extensively throughout Canada and the United States. They enjoyed fishing especially at Campbell River, BC. They also loved camping and purchased a place at Winderness Village as well as a time share in Fairmont, BC.

Joe had three children: Joseph (Brenda) Burnell Jr., Sylvia Browne of Calgary and Violet (Terry) Boutilier of Kitchener, ON. She was pleased to have step-grandchildren: Stephen Burnell, Joanne Burnell, Jennifer Rose Keys, Elyse Ashley Hatch, Olivia Skylar Browne and Lauren Louise Boutilier. In addition, there are four great-step-grandchildren. She frequently remarked that she was blessed to have this family and was so pleased to be invited for dinners and for special occasions.

When Joe died suddenly in 1986, Regina’s life again changed dramatically. She had to find meaning in her life. She became a parish volunteer and visited the sick and the shut-ins. She took courses to help her with Pastoral Health Care and also in the Palliative Care Ministry. She found this work to be challenging, rewarding, and gratifying. While attending an annual retreat she was introduced to a lay organization, the Sisters of Providence, and became an active member. It was a fulfilling part of her life. Regina sold her home in Dana Village and moved to Valley Ridge Retirement Center. She enjoyed many friendships there. When her health deteriorated, she moved to St. Teresa’s Covenant Care Center. She received excellent care from the staff and was most grateful for their attentiveness. The last while she was waiting to be with the Lord, her comment was always ,“When, God willing.” Regina lived a long, rewarding and fruitful life. She was blessed to have a peaceful death. We are proud and thankful to celebrate her life.

Condolences, memories and photos may be shared and viewed on Regina’s obituary at www.McInnisandHolloway.com.

If friends so desire, Mass cards are appreciated.

Share Your Memory of
Regina (Jean)
Upload Your Memory View All Memories
Be the first to upload a memory!
Share A Memory
Send Flowers