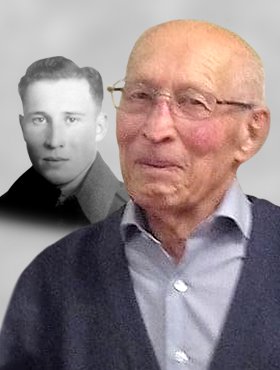 It is with sadness the family of Frank Anthony Schneider announce his passing on Tuesday, June 9, 2020 at the age of 97 years.

Frank was born on May 20, 1923 in Dysart, SK to Katherine (Biesick) and Henry Schneider. As a young man, Frank joined the army. Once out of the army, he went on to get his apprenticeship in vehicle mechanics. Frank would eventually take a job at Maclin Motors in Calgary, AB, where he met the love of his life, Jenanne Clare Hides. Frank then joined Shell Canada and worked there for thirty years. Frank and Jenanne married in February 1953, and over the next few years welcomed daughters Cheryl, Susan, and Kathi-Jo.

They both loved to travel, and their adventures took them everywhere from Canada, the continental USA, Europe, Hawaii, and Egypt.

Frank and Jenanne enjoyed fifty-seven years together before Jenanne’s passing in 2010. Frank loved sports - playing, coaching, and watching. He played and coached fastball, as well as enjoyed curling and golfing. If you needed to know anything about the Flames, Blue Jays, Stampeders, Oilers or curling you could count on Frank to have the answer.

A private graveside service will be held June 27. Condolences, memories and photos may be shared and viewed on Frank’s obituary at www.McInnisandHolloway.com.