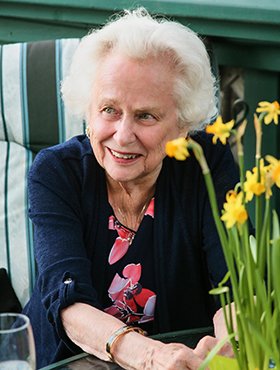 Joann lived a life full of adventure, creativity, service and family. The youngest of three girls, Joann’s love of adventure is best illustrated when she and her husband, Rogers Lehew, took a chance in 1960 and moved their young family (including her niece and in-laws) across the continent to start a new life in Calgary, AB where Rogers became General Manager of the Calgary Stampeders. Almost immediately upon arrival, Joann embraced all aspects of her new city and quickly became a pillar of the community joining clubs, sports groups, volunteering at her children’s schools, working with St. Andrew Church, and joining the local Cub troop as a leader. Looking for more, Joann also took roles as the President of the North Hill Rotary Anns, and as President of the Calgary Centre for Performing Arts Guild, where she started a craft group in 1982 that she maintained an active membership in for over twenty-five years. Joann also worked three years on the mascot committee for the 1988 Calgary Olympic Winter Games, and she accompanied Hidy and Howdy to dozens of events throughout Alberta. In addition to her extensive volunteer work, Joann also was an avid traveller, crafter, card player, and oil painter; gifts which she would readily share with everyone around her. Despite all her accomplishments, Joann’s primary joy in her life was always her family to whom she was a constant source of love, creativity, and utter joy. Joann met Rogers as students in a university botany class and for over seventy years since that day they were inseparable, right until her passing. Their example has since been a measure that all their children and grandchildren have since tried to emulate.

In addition to Rogers, Joann will be lovingly remembered by her children, Lora (Terry) Wyman and Larry (Marcia) Lehew; and her daughter-in-law Cathy Lehew. To her grandchildren, she was everything, and will be greatly missed by each of them, Daniel (Alyssa) Wyman, Joanna (Ryan) Wyman, Rogers (Jodi) Lehew, Thomas (James) Wyman, James Lehew, Kevin (Emily) Lehew, Molly (Patrick) Wilding, Kristine Lehew, Louise (Brian) Brzezina, and Julie Lehew. Joann will also be missed by her great-granddaughter Gianna Wilding and two expectant great-grandchildren. She is also survived by her sister Joyce Hyden. Joann joins her son Garry Lehew who unexpectedly passed away last year, her sister and brother-in-law Marjorie and Bill Stewart; and her brother-in-law Harold Hyden.

A Celebration of Joann’s Life will be held at McINNIS & HOLLOWAY (Park Memorial, 5008 Elbow Drive SW, Calgary, AB) on Saturday, August 01, 2020, at 2:00 p.m. A small gathering will follow in the Hospitality Centre at the Funeral Home. If friends so desire, memorial tributes may be made in Joann’s name directly to the Education Matters-Lehew/Wyman Fund supporting extra-curricular school programs at https://www.educationmatters.ca/campaign/lehew-wyman-family-endowment-fund/ or by mail to 1221 8 Street SW, Calgary AB, T2R 0L4. Condolences, memories and photos may be shared and viewed on Joann's obituary at www.McInnisandHolloway.com.

If friends so desire, memorial tributes may be made in Joann’s name directly to the Education Matters-Lehew/Wyman Fund supporting extra-curricular school programs at https://www.educationmatters.ca/campaign/lehew-wyman-family-endowment-fund/ or by mail to 1221 8 Street SW, Calgary AB, T2R 0L4.

Share Your Memory of
Joann
Upload Your Memory View All Memories
Be the first to upload a memory!
Share A Memory
Send Flowers