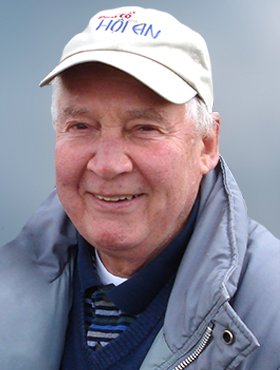 Charlie was a proud descendant of Alberta Pioneers (1867) and a life-long Albertan. While living in Riverside (Bridgeland) he graduated from Crescent Heights High School, where he excelled at sports, playing hockey with 1947 champions, Pee Wee Midget Buffalos and Junior football with the Calgary Broncs. Charlie was recruited by the University of British Columbia to play football with the Thunderbirds under coach Don Coryell. After an interim employment with the Province of Alberta and City of Calgary, he returned to UBC, graduating with a BA in Sociology and a BSW. Charlie married Delina Celli on June 20, 1963.  They had two children to whom he was an affectionate father and active supporter of their many activities in sports and performing arts. Charlie was also kind and knowledgeable coach to his community’s youth, a model for sportsmanship and fitness until this was taken by Parkinson’s in his later years. Charlie was employed by the City of Calgary for 28 years, initially as the Chief of Youth Probation, then later as a manager in this department through to his retirement in 1992. Charlie was a patron of the Alberta Arts community, an avid reader and enjoyed international travel with his wife and close friends. A true humanitarian, Charlie will be most remembered for his kind heart, generosity and his exceptionally detailed and accurate memory of world history, family ancestry and everyday life. In addition to his wife Del, Charlie is survived by his daughter Karen of Vancouver and son Gary and spouse Corrina of Calgary, and his four grandchildren Colton, Braydon, Kai and Emma.

Charlie is also survived by brothers William and Darren James, sister Judianne James, nephews Robert and David Sinclair and niece Heather Wieler.  Charlie will also be dearly missed by his aunt Joyce, his many cousins and countless loyal and loving friends. The family would like to thank the staff of Age Care Glenmore for their kind and expert care of Charlie over this past year. There will be no services at this time, but a future celebration of life will be arranged for family and friends in the future.

Share Your Memory of
Charlie
Upload Your Memory View All Memories
Be the first to upload a memory!
Share A Memory
Send Flowers