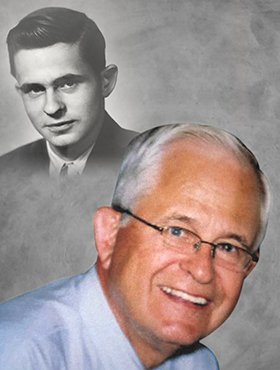 On February 8, 1933, Ralph and Marjorie Smith welcomed their first child into the world.  R. Carl Smith was born in his parents’ humble Sandford, ON farmhouse.  Carl’s childhood memories included working on the farm; weekly baths in a galvanized tub; and listening to Saturday night hockey games with Foster Hewitt.  Life on the farm involved tough hard work and as the eldest son, Carl spent many hours baling hay; cleaning manure left behind by the animals; and growing potatoes and corn.

Carl’s great dream of joining the Royal Canadian Air Force was discouraged by his mother and without the need to graduate from high school, Carl decided to drop out after completing Grade 10.  Eventually, his father encouraged him to apply to the Dominion Bank in Mount Albert so he could work during the winter months when responsibilities on the farm were less demanding.  At the age of 16, Carl became a Junior Clerk and earned an admirable salary of $850…per year.  His duties included distributing the mail and filling the bank’s ink wells each morning.  Carl also continued his work on the farm until a catastrophic fire occurred in spring of 1949 when the large Smith barn burned to the ground.  Carl singlehandedly rescued most of the animals, but barely escaped with his life as the barn collapsed minutes after he opened the gates to the horse stalls.  Fortuitously, the operator who managed the telephone switchboard and who alerted the volunteer fire department was a young lady by the name of Kay Oliver.

In 1952 and after several promotions, Carl was transferred to the big City of Toronto where he eventually became the youngest Bank Inspector in Dominion’s history.  The Dominion and Toronto Banks merged shortly thereafter and Carl continued to work for the new entity.  Friday nights always involved a bus ride back home and it was on these fateful journeys that Carl began to notice another young passenger, the very same Kay Oliver.  Four years later, they were married. Carl and Kay went on to have three boys.  Family life was busy and there were many backyard bbqs, camping trips, and extended family Sunday night dinners.

In 1972, Carl graduated from Harvard Business School, probably the only person without a high school diploma to do so.  A big move to Calgary soon followed.  The Smiths made the trip via a wood-panelled station wagon with three rambunctious boys and Snoopy the pet beagle.  Carl and Kay set about establishing themselves in Alberta with new friendships; volunteer activities and in 1980, the purchase of a beautiful piece of property in Windemere, BC.  Carl built much of the Smith family cottage by himself.  The Frugal Farm Boy and Banker in him preferred to rely on the help of his three teenaged and occasionally hungover sons rather than hire anyone.

Carl was heavily involved with his community.  He volunteered with numerous organizations including Trout Unlimited and Unicef Calgary.  In addition, he has served as Chairman of the Canadian Cancer Society (Calgary District); the Public Representative for the Institute of Chartered Accountants; a Director of the Rotary Club of Calgary and a Vice Chairman of the 1988 Calgary Winter Olympics.  Carl was instrumental in establishing Rotary’s Stay-in-School Program which helps underprivileged youth in pursuing post-secondary education.  Since its inception, the Program has helped over 100 young people meet their full potential.  For his volunteer efforts, he has been recognized with numerous awards including the Rotary Club’s Paul Harris Fellow Award on two different occasions as well as the Rotary Service Above Self Award of which less than 100 are annually given out in the two million person membership roster.

Carl eventually retired from his position as Senior Vice President at the TD Bank in 1987, but continued on as a Board member for a large number of national and international corporations.

During this time, Carl and Kay saw their family grow and expand.  There were many Ontario trips and numerous occasions where they hosted their eastern friends and family “in the mountains”.  Strong bonds with their Calgary friends led to vacations abroad; numerous hiking and ski trips and too many Happy Hour drinks on the Timber Ridge deck.  Sadly and unexpectedly, Carl lost Kay in 2000.  The following year, he married Bunny (Dawn) Andrews.  The two enjoyed many happy years indulging in their mutual love of hiking; travelling and hosting until Bunny’s health no longer allowed her to do so.

Carl was the trustworthy and principled friend to many.  He was the talented and generous woodturner who gifted his works of art to loved ones.  He was the beloved uncle who always opened his home to his many nieces and nephews.  He was the generous big brother to his own siblings as well as those of Kay and Bunny’s.  He was the sage advice-giver to his sons, his stepdaughters and all of his grandchildren.  Carl was responsible for many bbq roasts; was famous in the family for his fastidiousness in organizing his files and enjoyed nothing more than having his grandchildren phone him for guidance.

Carl was predeceased by his beloved brother Lloyd. Mourning his loss are Carl’s loving wife: Bunny; his three sons, Doug (Teresa), Steve (Diana) and Bill (Melanie); his two stepdaughters, Hilary (Bobby) and Marci; his grandchildren, Lianne (Tom), Michael (Lisa), Alexandra, Jameson, Alayna, Jenae, Jada, Ujia and Macklin; his much cherished baby sister, Ruth and brother Don, as well as too many friends and family to count.  He leaves behind a legacy of love, laughter and a life well lived.

The family is planning a small private service on Friday, July 31, 2020 to lay him to rest.  There may be a larger celebration of his life at later date, when it’s more appropriate for larger gatherings and travel.  The family also appreciated the many messages of love and support.  God bless. Condolences, memories and photos may be shared and viewed on Carl’s obituary at www.McInnisandHolloway.com.

The family would like to thank Rockyview General Hospital Units 72 and 93 for the tremendous efforts they made in trying to help Dad and make him comfortable.

Share Your Memory of
Carl
Upload Your Memory View All Memories
Be the first to upload a memory!
Share A Memory
Send Flowers