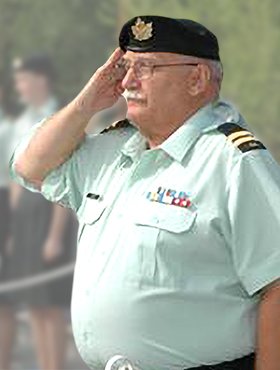 It is with great sadness that the family announces the passing of Gary Hurst in his 76th year.

Gary served Canada as a member of the Canadian Armed Forces for forty-five years, beginning with 1st Queen’s Own Rifles of Canada, then 3rd Princess Patricia’s Canadian Light Infantry before remustering as a Finance Clerk. His regular force service took him from London, ON to Calgary, to Cyprus twice and Egypt, and to HMCS Qu’appelle in Victoria. From there he served in Borden, Petawawa, Gagetown and finally Ottawa before retiring to Edmonton and Calgary. Retirement did not mean hanging up the uniform. He became an active leader in the Cadet Instructor Corps, guiding Army Cadets in Calgary and Vernon. He was also a leader in the Royal Canadian Legion, serving veterans and the community as the President of Branch 264 in North Calgary (Kensington). He is widely remembered as Papa Smurf by those that he taught and influenced, and will always be remembered for his kindness and smile.

In accordance with his and the family’s wishes, cremation has occurred and due to the current COVID19 restrictions a memorial service will be held at a future date. Condolences, memories and photos may be shared and viewed on Gary’s obituary at www.McInnisandHolloway.com.

Services for Gary HURST
There are no events scheduled. You can still show your support by sending flowers directly to the family, or planting a memorial tree in memory of Gary HURST.
Visit the Tribute Store