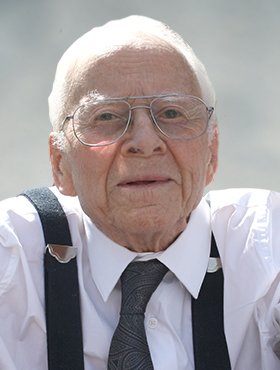 2:00 pm
Queen's Park Cemetery
3219-4th street NW
Calgary, Alberta, Canada
403-221-3660
Social distancing will be observed and masks worn. Our apologies, but please no hugs or handshaking. There will not be a reception following the Graveside Service.

Donald Calvert, beloved husband of Joan Kathleen Calvert (née Gaschnitz), went to be with the Lord on Friday, July 24, 2020 at the age of 88 years, from the ICU of the Royal Alexandra Hospital in Edmonton.

Don was born in Vilna, AB on April 26, 1932 and lived on the family homestead until age 22. A fifth-generation pioneer, working from childhood with horse-drawn implements, he even used a walking plow. He virtually ran the farm after his father became unwell. He excelled at wood and metal work; his talent known throughout his district. After high school graduation he moved with his parents to Edmonton, where he worked in building construction, planning to attend university as a prospective Industrial Arts teacher.

As a junior and senior high instructor, Don’s abilities became well known in the Calgary school system. Students fought to enroll in his classes and loved to produce beautiful furniture. The enjoyment of the relationship was mutual, and he was promoted to principal— a position he held in several schools for nineteen years. There his unique talents engaged the admiration of the community. After retiring at 59, his ambition had turned back to construction, and with the help of his wife and three teenage children, a four-bedroom cottage rose in the vicinity of Slave Lake. During those years he had been chairman of the boards of his church and Christian Research Institute Canada, often travelling and speaking, exposing the infiltration of New Age thought into many aspects of society. He was a steadfast Christian who lived his faith in earnest.

Don leaves behind his loving wife of sixty-three years Joan, his three children, Kevin, D. Loralea (Stefan) Butikofer and Kristal Calvert (Claude Veilleux); and four grandchildren, Christian and Sophia Butikofer, and Rose and Lily Calvert. He was predeceased by his sister Adelaide (Labonte).

Thank you for being with us for this precious time, dear husband, father and grandfather. We hear your loving reply: “God be with you till we meet again.”

Graveside service will be held at Queen’s Park Cemetery (3219 4 St NW, Calgary) on Friday, August 7, 2020 at 2:00 p.m. Social distancing will be observed and masks worn. Our apologies, but please no hugs or handshaking. There will not be a reception following the Graveside Service. In lieu of flowers, donations may be made in Don’s name directly to Christian Research Institute Canada, 56051 Airways P.O., Calgary, AB, T2E 8K5. Condolences, memories and photos may be shared and viewed on Don’s obituary at www.McInnisandHolloway.com.

Share Your Memory of
Donald (Don)
Upload Your Memory View All Memories
Be the first to upload a memory!