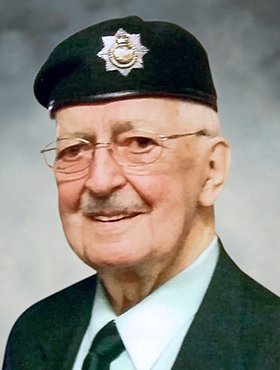 With heavy hearts the family of Walter Kosowan announces his passing on Friday, August 21, 2020 in Calgary, AB, at the age of 90.

Walter was born in Gardenton, MB, on July 16, 1930. He moved to Kapuskasing, ON, at age 5 with his family, where he stayed until he enlisted and served with the Canadian Armed Forces from 1950 to 1977. Walter served in the Korean War, in Korea and Japan from May 1951 until late 1952. Upon returning home, he reenlisted with the RCASC, continuing his service in various positions within the Canadian Armed Forces at Base Borden, ON, and Camp Takhini, Whitehorse, YK, until 1977. Walter was also a civilian member of the RCMP from 1977 to his retirement in 1990. Walter and Murna moved to Calgary in late 1995 where he joined the Royal Canadian Legion Branch No. 264 Kensington. He served as president of the Calgary Senior Sports & Recreation Association for fifteen years. Walter loved hockey the most as he used to play in his younger years, and in a recreational league for four years in Whitehorse. Because of this, it was all too fitting of him to work with the Calgary Flames and Hitmen for fifteen years.

Walter will be greatly missed by his family and friends.

Walter was predeceased by his son David; parents, William and Helen Kosowan; and sisters, Anne and Eva.

Walter did not wish to have a formal service. If friends so desire, memorial tributes may be made directly to the Royal Canadian Legion, www.legion.ca/donations. Condolences, memories and photos may be shared and viewed on Walter’s obituary at www.McInnisandHolloway.com.

Share Your Memory of
Walter (Wladymir)
Upload Your Memory View All Memories
Be the first to upload a memory!
Share A Memory
Send Flowers