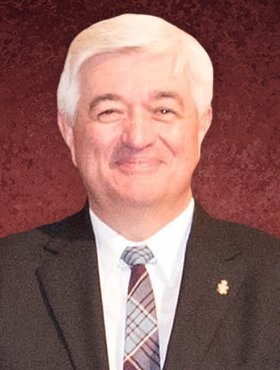 Steve was born in Sydney, NS. When he was old enough, Steve joined the Royal Canadian Air Cadets, where he achieved his power flight wings. He held the position of squadron Warrant Officer and upon graduation, he joined the Cadet Instructors Cadre, receiving his commission in 1978. Steve served over a decade in the Canadian Forces Reserves and in the early 1990’s; he went back into uniform and served as Commanding Officer of 538 Buffalo Squadron RCAC.  During this time, he joined the Royal Canadian Air Force Association, and received his forty year pin last year. Steve was heavily involved in the different levels of the Association, at 783 Wing, Alberta Group and lastly National, holding the position of National President since 2016.

Steve studied science and engineering at Dalhousie University and the University of Calgary, graduating with degrees in both, plus a degree in professional Management. He held technical and senior leadership positions in natural resources, consulting and energy industries.  Steve’s talents led him to serve on a design code committee with the Canadian Council of Ministers of the Environment and The Canadian Standards Association. After starting his professional career in Halifax, he was transferred to Calgary in 1981 and later joined Shell Canada Limited.  He founded Shieling Technologies in 1991 and worked with organizations such as UMA, Devon Canada and GKX Corp.  Steve was moving into semi-retirement but still kept active working in specialized project management, regulatory affairs and land development.

Steve was a former executive of the Dalhousie University Alumni Association, Volunteer for the Canadian Cancer Society, and a member of several professional, service, military, cultural and aviation organizations, including the Canadian Owners and Pilots Association, (a Silver Club member) RAUSI, the Air Force Museum Society of Alberta, the Royal Canadian Legion, and (an Honorary Member) the 410 Tactical Fighter Squadron.  He has been a strong advocate for youth (Air Cadets) Air Force and aviation, and Veterans’ rights. In later years, Steve applied his energy to supporting his daughters involved in the Calgary Highland Dancing Association, reveling in their successes.

Steve enjoyed skiing, sailing, kayaking, travelling back to Nova Scotia each summer, and getting into the air whenever possible.

Steve leaves behind his beloved wife Jane, his cherished daughters, Heather and Alyssa; older brother Fraser, one aunt and cousins in Nova Scotia, Ontario and Massachusetts.

Funeral Services will be held at St. Andrews Presbyterian Church (703 Heritage Drive S.W., Calgary, AB) on Wednesday, September 9, 2020 at 2:30 p.m. Reception to follow at the Church. Due to limited space related to COVID restrictions, please RSVP to psulek@shaw.ca.

Condolences, memories and photos may be shared and viewed on Stephen’s obituary at www.McInnisandHolloway.com.