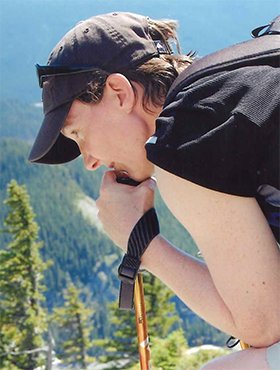 If friends so desire, in lieu of flowers donations can be made directly to YMCA Calgary.

Marianne Elizabeth Merrill passed away on Thursday, October 29, 2020 at the age of 53, after a valiant and courageous battle with cancer.

Marianne was born in Montreal, QC on January 6th, 1967 to Dorothy Unger and Carmen Merrill. Marianne grew up in Grande Prairie and attended Parkside and Montrose Schools, before moving to Central Alberta, where she graduated from O’Leary High School in Sherwood Park.

Marianne was an avid outdoors woman who enjoyed cycling, hockey, and hikes in the mountains, especially in the Kananaskis and Kootenay areas with her family and friends - there wasn’t a mountain she wouldn’t climb!

Marianne will be remembered as an amazing teammate and tough competitor by her many friends with The Calgary Reckers and Jags hockey and soccer teams. Marianne was a friend to many and a caring and generous Auntie whose calming nature was felt by all in her presence.

A private family gathering will take place at a later date. If friends so desire, in lieu of flowers donations can be made directly to YMCA Calgary. Condolences, memories and photos may be shared and viewed on Marianne’s  obituary at www.McInnisandHolloway.com.

Share Your Memory of
Marianne
Upload Your Memory View All Memories
Be the first to upload a memory!