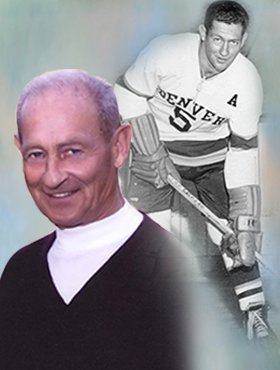 It is with great sadness that we announce the passing of Kenneth (Ken) Mark Raymond on Saturday, November 28, 2020 at the age of 86 yrs.  He passed peacefully with his beloved wife Phyl at his side.

Ken was born on April 18, 1934 in Nokomis, Saskatchewan.  At an early age, he moved with his family to Regina.  Ken was an avid hockey player, he played for the Regina Pats and from there he went south on a scholarship where he played for the Denver University Pioneers.  Upon his graduation, Ken returned home with his bride to be, Phyllis Ann Metcalf.

Ken and Phyl moved to Calgary, where he began his career working as a Landman in the oil business. Ken was self-employed and worked alongside his two sons on many different oil and gas investments until his retirement.

Ken was an avid athlete and hockey was his number one sport. He also excelled at track, and loved to hunt birds with his sons and their many dogs. Ken also enjoyed curling.  When he wasn’t curling himself, he was there watching and supporting Phyl, who represented Alberta at the Senior Ladies National Championship winning bronze, and was Canadian National Champion at the Masters.

Ken loved working outside planting trees, shrubs and maintaining his acreage(s) in the Bearspaw area.  His first acreage was south of Eamons Bungalow’s which is now part of Calgary’s “Tanglewood” community. A number of his spruce trees remain as part of the Twelve Mile Coulee conservation area and pathway system.  When the city expanded, Ken and Phyl moved to an acreage on the south side of the Bearspaw Golf and Country Club.  Ken enjoyed daily exercise, jogging, walking with Phyl, and golf at Bearspaw.

Ken and Phyl followed their grandchildren’s pursuits especially if it was hockey.  After many games he would offer chalk talk and tips.  When greeting people, he was always quick with a genuine hand shake.

“Ken played every shift and played a great game”.

Due to Covid-19, the family will hold a private gathering on Sunday, December 6, 2020 at 1:00 p.m.  Condolences, memories and photos may be shared and viewed on Ken’s obituary at www.McInnisandHolloway.com.

Our sincere thanks to the staff at Rocky Ridge Retirement Community.

In living memory of Ken Raymond, a tree will be planted in the Ann & Sandy Cross Conservation Area by McINNIS & HOLLOWAY FUNERAL HOMES, Crowfoot, 82 CROWFOOT CIRCLE NW, CALGARY, AB T3G 2T3, Telephone: 403-241-0044. His family will also plant many trees in his memory at the family’s property.

Share Your Memory of
Kenneth (Ken)
Upload Your Memory View All Memories
Be the first to upload a memory!
Share A Memory
Send Flowers