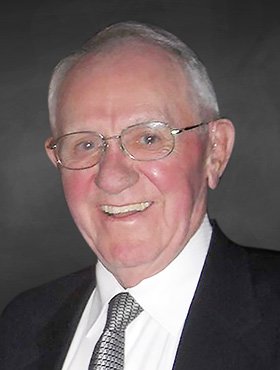 If friends so desire memorial tributes in Jack’s name would be gratefully accepted by The Calgary Rotary Clubs Foundation (www.canadahelps.org/charities).

It is with profound sadness we announce the peaceful passing of John (Jack) Forrest Black on Tuesday, January 5th, 2021 at the age of 95.

Jack was born on October 23, 1925 in the coal mining town of Nordegg, AB, the son of Rachel Wright Forrest and Malcolm McKenzie (Mac) Black. Jack was extremely proud of his Nordegg heritage and of his deep roots in Alberta. His dad was born in 1899 in Fort Macleod (then NWT). His grandfather and namesake John Black, was a politician and entrepreneur in southern Alberta in the late 1800’s. His storefront sign in Fort Macleod read: “OLD JOHN BLACK, ADVENTURER & AGITATOR, GROCERIES  & GUFF”. Jack came by his sense of humour honestly.

Jack left Nordegg in 1943 to join the Royal Canadian Air Force during WWII and became a Flight Sargent Air Gunner. After the war Jack returned to Alberta and settled in Calgary where he met Myrtle Julia Johnson at Penley’s Ballroom. They were married on May 20, 1948 and spent sixty-nine happy years together until Myrt’s passing in 2017. After Jack’s graduation in Pharmacy from the University of Alberta in 1951, he started in business in Calgary, owning a number of successful independent drugstores until his retirement after selling Britannia Pharmacy. Jack provided outstanding customer support and many of his customers became his friends.

Jack was always active, skiing and curling in his younger years and playing golf (including 2 holes-in-one) until his 94th year. He was an avid fan of the Calgary Flames (inaugural season ticket holder) and the Calgary Stampeders. One of the most important parts of Jack’s life was his involvement with The Rotary Club of Calgary at Stampede Park including his stint as President.

Jack was a very special person who connected with people of all ages and backgrounds. Growing up in Nordegg instilled in him the importance of hard work, community and family. With these pillars, and his good fortune to connect with Myrt, he lived a rich, happy and full 95 years. He contributed to his professional world and to the broader Rotary world. He loved his kids and they loved him and he was blessed with grandchildren and great-grandchildren, all of whom gave him such joy. Jack was always so inclusive, generous and energetic with a sincere interest in others. He was a role model for his family and he will be missed.

Because of Covid there will be no funeral at this time. You can toast Jack with a rum and coke any Friday at 3:30 p.m. at his weekly Happy Hour. If friends so desire memorial tributes in Jack’s name would be gratefully accepted by The Calgary Rotary Clubs Foundation (www.canadahelps.org/charities). Condolences, memories and photos may be shared and viewed on Jack’s obituary at www.McInnisandHolloway.com.

The family would like to extend their deepest gratitude to the staff and residents of The Manor Village at Signature Park where Jack (and Myrt) resided for the past eleven years. They provided companionship and kind, compassionate assistance. The family would also like to thank the caring staff of Unit 72 at the Foothills Hospital where Jack spent his final days.

Share Your Memory of
Jack
Upload Your Memory View All Memories
Be the first to upload a memory!