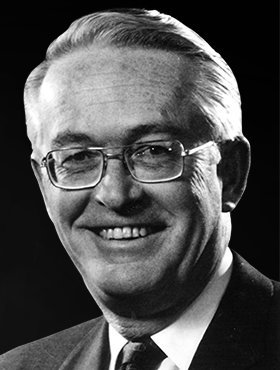 He was born December 30, 1927, to Clement Wallace Dumett  Sr. and Dilma Rausaline Dumett (nee Arnold) in Tacoma, WA. He lived with his paternal grandparents for his first few years, after the passing of his mother at his birth. Clem first attended school in Seattle and then moved to California with his father, graduating from Whittier Union High School in Whittier, CA. He started his college career at Stanford University, taking a break for a two year stint in the Army. Returning to Stanford to complete his education, Clem graduated in 1951, with a BSc in Petroleum Engineering. He loved his college years, spending time with his Alpha Tau Omega brothers and participating in numerous intramural sports. He commenced his forty year career with Unocal (formerly Union Oil), starting in the oilfields near Coalinga, CA. Opportunity presented itself to join the growing oil scene in Alberta, Canada and Clem transferred to Calgary in 1955.  A short time later he invited Carolyn (nee Coulthurst), whom he had been dating before leaving California, up to Calgary for a visit. During her visit he proposed, and they were married in March 1957. Son Daniel and daughters Joanne and Patricia arrived in rapid succession. Their forty-four year journey together ended with her untimely passing in June 2001.

Clem’s accomplishments were many but he also had many passions outside of work. Clem’s career with Unocal saw him working in the production and exploration areas, culminating as President of Unocal Canada. Clem was Chairman of the Board of Governors for the Canadian Petroleum Assc., 1981-82 where he fought tirelessly to stop the implementation of Trudeau’s National Energy Policy. He served as President of the Calgary Petroleum Club 1985-86 and was Chairman of the 29th Oilmen’s Golf Tournament in 1979, a member of the Calgary Golf & Country Club, Petroleum Club and Ranchman’s Club. Over the years he was a Director for Unocal Canada, Cansulex Limited, Peace Pipe Line, The Glenbow Institute, Maximum Energy Trust, Talisman Energy and the Kahanoff Foundation.

In his personal life Clem was a life-long outdoorsman. His passion was fly fishing but his outdoor pursuits included hunting, snow skiing, hiking, water skiing and golfing. He successfully passed this love of outdoor activities to his children and grandchildren. Clem volunteered in his community as well, supporting the Scarboro Neighbourhood Association, St. Stephen’s Church (Vestry and Rector’s Warden) and the Calgary Philharmonic (Board and Treasurer). Clem and Carolyn were life time supporters of Heritage Park and had many other philanthropic interests.

Clem spent a great deal of his life travelling for business and pleasure. His trips to Africa and Israel were among his favourites. In 1969 Clem discovered Whitefish, Montana on the advice of a close friend. He and Carolyn purchased a recreational property in Whitefish in 1971 and after that he spent time at the Montana cabin as often as possible.

Clem loved his native country, the USA, but became a Canadian citizen in 1989 and eventually relinquished his U.S. citizenship, choosing to retire in Calgary.

We say goodbye to Clem who was a loving, attentive Husband, Father, Grandfather, Papa and Friend.

A private gathering will be held at a later date due to current restrictions. Condolences, memories and photos may be shared and viewed on Clem’s obituary at www.McInnisandHolloway.com.

Our sincere thanks to Michelle Carew and the staff at Staywell Manor. Clem said he could not have imagined a better place to spend his final years.

Share Your Memory of
Clement
Upload Your Memory View All Memories
Be the first to upload a memory!
Share A Memory
Send Flowers