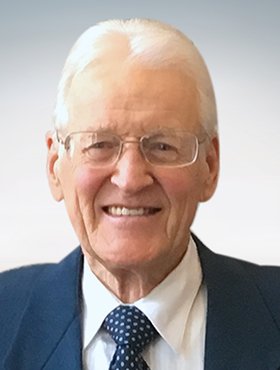 A loving and generous father, grandfather, brother, uncle and son, Jack lived a remarkable life. He will be remembered for his commitment to family, his positive outlook on life, his storytelling, his contributions to sport and community, and the genuine way he connected with people from all walks of life.

Born on the family homestead near Big River, SK, Jack was the eldest of six children born to Edwin “Ed” and Lily Wilson (nee Dunn). He spent his early years on the homestead and lived with his grandparents in town to be closer to school. His family moved to Victoria, BC, in 1950, where Jack’s lifelong passion for sport emerged.

As a teen, Jack played lacrosse with the Junior Victoria Shamrocks, winning the BC championship in 1957 and the Western Canada Championship in 1958. In 1958-59, he played defense on the Prince Albert Mintos junior hockey team. From 1960-1963, he attended the University of Denver (DU) on a full athletic (hockey) scholarship. While playing for the DU Pioneers, Jack helped the team win the NCAA National championship in 1961 and set an NCAA record for the most wins (30) in a single season. A pinnacle achievement for Jack was his selection to Canada’s first national ice hockey team. Assembled and coached by Father David Bauer, the team finished fourth at the 1964 Olympics in Innsbruck, Austria.

At DU, while studying for his Bachelor of Science in Business Administration degree, he met Susan Nabors from Calgary. They married and settled in Calgary in 1964, where they had three children in the ten years they were together.

In the late 1960s, he played Senior hockey and was captain of the Calgary Spurs. He also coached minor hockey for a few seasons and worked on television as the color commentator for the Calgary Cowboys of the old WHA.

In the ‘70s and ‘80s, he dedicated countless hours to volunteer roles with the Calgary Booster Club, where he was President in 1976, and recognized as an honorary life director. From 1979 – 1981, Jack worked as a key member of the Bid Committee for the Calgary ’88 Olympics. He travelled extensively in Europe to meet with many international winter sport federations and was instrumental in securing their support for Calgary’s bid. Recounting these sporting and Olympic experiences with friends and family, and through public speaking engagements, was a source of joy for Jack.

Jack’s work ethic and determination to succeed were evident in everything he did, holding various executive positions in business and as an entrepreneur with his public speaking and communications company.

Jack believed in the power of physical activity to develop character and life skills. He was an avid nature lover and enjoyed many outdoor pursuits, including fishing and skiing. He shared these values with his family, and was dedicated to supporting his children and grandchildren in their sporting endeavours – as their #1 fan at games, competitions and regattas.

Proud of his family heritage and being a Mayflower descendant, Jack is survived by his children, Virginia (Cameron) Webster, Valerie Wilson (Brian Olorenshaw), and Andrew Wilson (Michelle Kula-Wilson); grandchildren, Alissa, Kyle, Cortland, and Lily; and siblings, George “Toby” (Karen), Edna Barrieau, Donald “Buzz” (Denise), and Cheryle (Perry). He is also survived by his nieces and nephews, Toby, Becky, Cindy, Kristin, Justin, Tyler, and Samantha; as well as numerous cousins and other relatives. Jack was predeceased by his parents, and his brother Roger.

Jack will be deeply missed by his family and friends. A Celebration of Jack’s life will be planned when family are able to travel to attend. Condolences, memories and photos may be shared and viewed on Jack’s obituary at www.mcinnisandholloway.com. If friends so desire, memorial tributes may be made to the Calgary Booster Club Sport Legacy Fund by contacting The Calgary Booster Club at info@calgaryboosterclub.com

In living memory of Jack Wilson, a tree will be planted at the Ann & Sandy Cross Conservation Area.

Share Your Memory of
John (Jack)
Upload Your Memory View All Memories
Be the first to upload a memory!
Share A Memory
Send Flowers