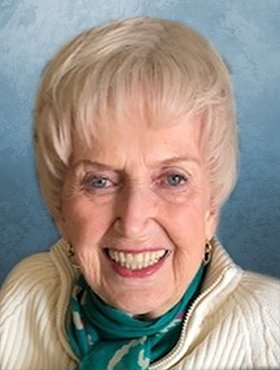 Joan was born in Wishart, Saskatchewan in 1927, the beloved only daughter of Nora and Frank Brennan. She took a secretarial program at the Saskatoon Normal School in 1946, and afterward began working at the Saskatchewan Cancer Clinic as an assistant.

That year she went on a double blind date. She found herself drawn not to her own date, but to the man her friend was matched with. Vern Brown was a handsome sailor just back from the war. The two married in 1948, and were devoted partners for 66 years, until Vern’s death in 2014.

Joan and Vern‘s first son, Arthur, was born in 1950 with cerebral palsy and developmental disabilities. They were instrumental in establishing the John Chisholm School, so Artie and others with similar challenges could access the resources they need.

Joan’s steadfast belief that people with disabilities be accepted just as they are had a widespread impact not only on Artie, but on many people throughout her community, at a time when attitudes were often quite different. Joan continued to care for Artie until her final days.

Joan and Vern settled in Moose Jaw, where Vern established an auction business. Joan clerked at the auctions until they grew and were able to hire more help. Meanwhile, she gave birth to her son Scott.

The Browns built their cottage on Buffalo Pound Lake when Vern took on the project of developing the North Shore. Theirs was the first cottage on the lake. On July 1st 1953, Joan moved out to the 20’ by 24’ cabin for the summer with no utilities and two babies under three.

Over the next few years, she had Michael, then Margaret. Soon, the family spent every summer at the lake. They oversaw many improvements and renovations over the years. All told, Joan, Vern, their children, and later their grandchildren, spent more than 50 summers at Buffalo Pound.

Joan would later say the times she spent with her family at the lake were the happiest of her life.

Joan visited more than 25 countries with Vern, mostly on trips related to their furniture store, Brown’s Fine Furniture and Auction. She said her favourite trip was to Corfu, Greece. Other standouts included New Zealand, Morocco, Venezuela and Denmark.

Joan was a lifelong monarchist, and grateful she had the opportunity to meet Prince Philip, not once but twice. She and Vern received a personal invitation to dine with the Queen in 1978, but that was actually not the visit she spoke of most often. Her favourite story to tell was when His Royal Highness attended a Ducks Unlimited dinner in 1987, and one of her press-on fingernails popped off just moments before she shook his hand.

Until the very end of her life, Joan was engaged in the world around her. She missed Moose Jaw after moving to Calgary, and kept in touch with her friends over the phone. She knew every nuance of the political landscape in Canada and the U.S., and lamented that so many of her new Alberta neighbours (and some family members) did not share her deep admiration of Justin Trudeau.

She was predeceased by her husband Vern, her son-in-law Doug Neff, her brothers Bernard, Roy and Edward, and her sisters-in-law Georgina and Muriel, who was like a sister to her.

Joan is a testament to the value of hard work, the benefit of a positive attitude, and the power of prayer. Those who knew her will laugh when they remember her trying to get a name right on the first try. Her family will always think of her when we hear the expression “Oh, for the love of Pete!” We will miss her dearly, but know to feel close to her, we need only send a prayer to her patron saint, St. Jude. Joan made certain that he is on a first-name basis with all of us.

Her family plans to hold a celebration of life when gathering safely is possible. Memorial donations may be made to the Moose Jaw Health Foundation. Condolences, memories and photos may be shared and viewed on Joan’s obituary at www.McInnisandHolloway.com.