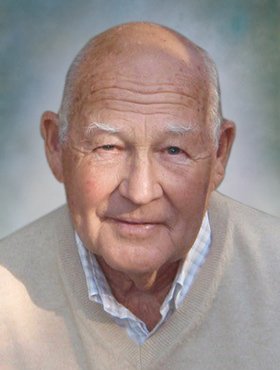 John Walter Dawson of Calgary, AB, passed away on Saturday, March 13, 2021 at the age of 92 years after a brief illness.

John was born and raised in Toronto and spent much of his teenage years playing sports and taking odd jobs in the 1940s. In 1947, John was admitted to the pre-med program at the University of Toronto, starting a career in medicine that would continue for over fifty years. In the summer of 1948, John landed a summer job as a busboy at the Banff Springs Hotel, where he met Pauline - from Vancouver - who also had a summer job there as a waitress. For five straight summers John and Pauly returned to the Banff Springs to work, have fun and strengthen their courtship. They were engaged on Valentine’s Day in 1951 and married on September 4, 1952.

After completion of his medical residency in internal medicine at Toronto General Hospital and the Banting Institute, John and Pauly packed up Janet and Bruce and moved to Calgary in July 1959. The official reason for the move was a career opportunity with the Calgary Associate Clinic, but the decision was really driven by their desire to return to the Rockies. Calgary became their permanent home where there they raised their growing family. John had a great love for sports and the outdoors. To his young children he introduced skating, skiing, racquet sports and even golf, teaching them the love of the game and joy that came with playing them.

Respected as an astute clinician, John was appointed as the first head of medicine at the newly opened Foothills hospital in 1966. When the Faculty of Medicine began in 1967, John was the first Associate Dean of Clinical Affairs, Director of Continuing Medical Education and Professor of Medicine. In 1989 he left the Foothills to become involved with the new Calgary Geriatric Program, and in 2003 retired from active clinical practice to spend more time with Pauly travelling the world. John loved to play and watch sports, especially golf and tennis and could be seen well into his eighties hanging out at the Glencoe Club and the Earl Grey GC. John stayed involved with the medical and academic community as President of the U of C’s Emeritus Professor’s Association and member of the University Senate. In recognition of his outstanding service to the medical community, the Dr. John Dawson Award for Clinical Excellence is awarded annually by the U of C to exemplary physicians in the Department of Medicine.

John loved listening to music, reading and keeping up with current events, but his greatest treasure was spending time with family. He was immensely proud of his children and grandchildren and enjoyed nothing more that sharing stories at family get togethers. Right up until his last week of life, he was bringing smiles to everyone during the Covid family zoom calls.

Special thanks to the care providers at Staywell for their kindness to John and Pauly over the years. With the present health situation there is no plan for a formal remembrance ceremony, but messages of condolence can be offered on John’s obituary at www.McInnisandHolloway.com.