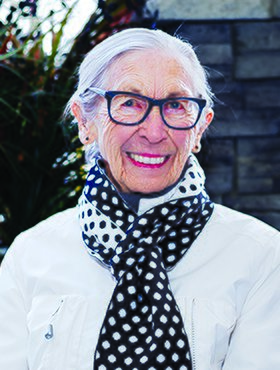 It is with profound sorrow that we announce the passing of our wonderful mother, grandmother, great-grandmother, and loving friend, Agnes Anna Cooke, also affectionately known as Steve, on Tuesday, April 27, 2021 at the age of 96 years.

Agnes was born November 3, 1924, in Elfros, SK, to Thorbjorg and Eirikur Stephanson. She was raised on the family farm there with her four brothers and a sister. In 1947, Agnes graduated from the Saskatoon City Hospital School of Nursing. It was in Saskatoon that she met her future husband and the love of her life, Donald Cooke. Donald and Agnes were married in 1950, and lived for a short time in Edmonton before settling in Calgary where they raised their three children. Agnes was very proud of her Icelandic roots and was a long-time member of the Leif Eiriksson Icelandic Club. She was involved with her church and enjoyed volunteering at numerous organizations over her long life. Education and community were of utmost importance to Agnes, and she gave of herself to so many causes in so many ways. But above all else, family was most important to Agnes. She was an incredible role model for her children, grandchildren and great-grandchildren, and her large extended family of nieces, nephews, and great-nieces and nephews.

Agnes is survived by her son Bill (Penelope); her daughter Barbara (Phil); her grandchildren, Wesley, Colleen, Steven, Andrew, Sarah, Jared, and Erica; and twelve great-grandchildren. She was predeceased by her loving husband, her parents, her sisters, Kristin and Elin; her four brothers, Barney, Eric, Stephan and Harold; and by her cherished daughter Catherine.

A Private Family Service will be held. Condolences, memories and photos may be shared and viewed on Agnes’s obituary at www.McInnisandHolloway.com. If friends so desire, memorial tributes may be made directly to the Calgary Homeless Foundation, 615 Macleod Trail S.E., Calgary, AB T2G 4T8 Telephone: 403-237-6456.

Share Your Memory of
Agnes
Upload Your Memory View All Memories
Be the first to upload a memory!
Share A Memory
Send Flowers