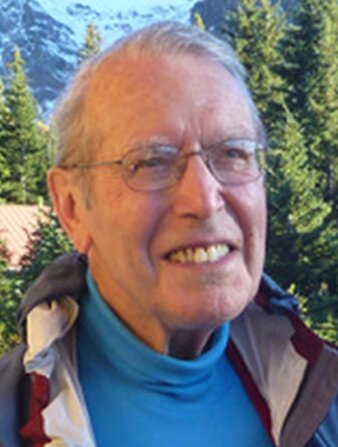 With regret, the family has elected not to proceed with the previously announced reception at the Calgary Golf & Country Club.

Never forgetting his roots in Pictou County, NS, Dad made his future in the West with the woman he adored for over sixty years and never stopped adoring, Joan A. Williams, who passed away in 2015. Together they started their marriage in Montreal, moving to Calgary in 1954, where they raised their family of five kids, four boys and a girl; and where Dad launched what was to become an accomplished career in the business and charitable worlds. A consummate gentleman, forever an engineer and problem solver, a man of deep faith, values and discipline. As CEO and Chairman of TransAlta Corporation, Chairman of the Province of Alberta Treasury Branches, and Chairman of The Banff Centre, as well as, chairing multiple government commissions, co-founding or helping lead foundations and public initiatives, he touched many people along the way. Dad did not seek recognition for his accomplishments, his reward was in finding solutions and doing the best job he possibly could. He loved the mountains, and his second home in Canmore, for hiking and cross country skiing, which he did well into his nineties, priding himself in his latter years as perhaps the oldest man on the mountain. He shared his love of the Rocky Mountains with his kids and grandchildren, and we are forever grateful. In his urban setting in Calgary there were frequent sightings of Marshall walking briskly to and from downtown each day or tenderly caring for the memorial park bench for his deceased son Colin.

Dad was educated in the Maritimes at Acadia University, obtaining his Bachelor of Engineering and Masters in Engineering (Civil) degrees from the Technical University of Nova Scotia (now Dalhousie), and was bestowed three honorary doctorate degrees from the Technical University of Nova Scotia (TUNS), the University of Calgary and Dalhousie University. His corporate directorships were many including; Sun Life, Canada Northwest Energy, PanCanadian, Royal Trustco, Stelco, and Fortis. He chaired or helped lead multiple charities, foundations, and commissions, to name a few, including; Ralph Klein’s Financial Review Commission (‘93), The Manning Innovation Awards Foundation, the Calgary and District United Way Campaign, Citizenship Matters – for you, for me, for Canada, the C.D. Howe Institute and the Environment and Energy Studies Foundation (SEEDS).

Marshall is survived by his children and their partners, Peter and Carol Ann, Alec and Susan, Stephen and Cari, and Margot and Dennis; six grandchildren, Anna (Matt), Sacha (Colin), Ty, Carly (Justin), Mackenzie and Kenna; and four great-grandchildren, Frances Bea, River, Emery and Codie. He was predeceased by his wife Joan, and son Colin.

Funeral Services will be held at Grace Presbyterian Church (1009 – 15th Avenue S.W., Calgary, AB) on Friday, September 17, 2021 at 2:00 p.m. *With regret, the family has elected not to proceed with the previously announced reception at the Calgary Golf & Country Club*. Condolences, memories and photos may be shared and viewed here. If friends or family so desire, memorial donations may be made to the Marshall M. Williams Endowment at the Banff Center for Arts and Creativity, at https://www.banffcentre.ca/support-us/donate, Telephone (403)762-6430 or toll free to 1(888)495-4467, support@banffcentre.ca. Heritage Canada will match a portion of donations made.

Thank you to all the staff at Amica Britannia and those that took particular care of Dad along the way, including Dr. Han. We wish we could name all those who helped, but you know who you are. And thanks to his resident pals who kept him entertained over meals and the occasional glass of wine.

Marshall's memorial card can be viewed using this link

Share Your Memory of
Marshall
Upload Your Memory View All Memories
Be the first to upload a memory!