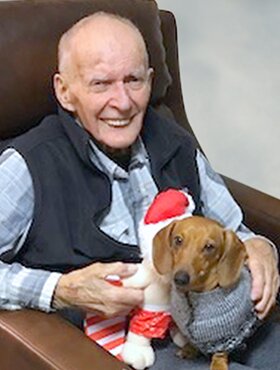 Ted grew up on the family ranch on the Little Red Deer River and moved to Bottrell farm where he went to school.  Ted graduated from the Hinton Training Centre as a Forest Officer.   He worked for the Alberta Forest Services and was promoted to a Forest Officer 5 later in his career. Ted worked for the Forestry from 1954 to 1987.

He enjoyed the outdoors and loved being with his friends and family and telling stories of his many adventures in life. He could often be found fishing, hunting, trapping, horseback riding, quadding or skidooing.   Theodore had many trips to Las Vegas in his younger years with his wife and good friends, Lea and Lawrence Kennedy. He will be most remembered for his love and devotion to his family.

Ted was predeceased by his parents, Violet and William; his wife Dorothy; his son Bill; his brothers, Jack, Bill, Ross, and Jim; and his sisters, Gail Vipond and Lorraine Houghton.

As per Ted’s wishes no formal services will be held. Condolences, memories and photos may be shared and viewed here.

Thanks to all the Health Care Workers and support staff at the Bethany Care Home for their warmth and caring love they provided, thanks to all his good friends back home in Rocky Mountain House for all their support, especially in the later years when Dad needed them the most.

Share Your Memory of
Theodore
Upload Your Memory View All Memories
Be the first to upload a memory!
Share A Memory
Send Flowers