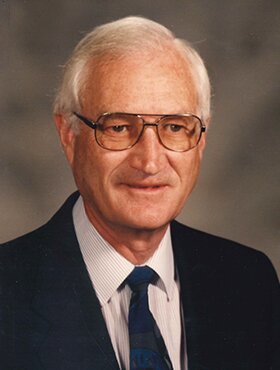 Our loving husband, father, and grandfather passed away peacefully on Friday, November 19, 2021 at the age of 87 years with his family by his side.

Doug was born in Prince Albert, Saskatchewan, and grew up in Antigonish, Nova Scotia, where he attended St. Francis Xavier University (St. FX) earning his undergraduate degrees in both Geology and Education. This is also where he began his teaching career. While in Antigonish, he served his parish, St. Ninian’s, as an altar boy and later as the President of the Parish Catholic Youth Organization. He was commissioned in the Royal Canadian Navy (Retired) and was an Officer Instructor in the Royal Canadian Sea Cadets.

Doug spent the greatest part of his working life with the Calgary Catholic School Board. He began with the Board in 1958 as a teacher and counsellor at the then-new St. Mary’s Boys High School under the tutelage of the Basilian Fathers. In 1962, he was called upon by the Board to be the founding principal of St. Francis High School where he served until 1978, after which he was called to the District as the Coordinator of Secondary Education, then as Associate Superintendent Administration, and finally as Chief Superintendent before retiring in 1992. Following his retirement, Doug spent an interesting six years on the Admissions Committee of the Faculty of Medicine at the University of Calgary.

Doug was active in the Catholic Church and served St. Luke’s Parish as their first Parish Council President in addition to later being a Lector, Eucharistic Minister, and Sacristan. He served the Roman Catholic Diocese of Calgary on the Publishing Board of The Carillon and spent ten years on the Foundation Board of Governors of St. Joseph’s Seminary and Newman College, under the Chairmanships of Archbishop Joseph N. MacNeil and Archbishop (now Cardinal) Thomas Collins.

Giving back to the community and golfing were but two of Doug’s passions. He volunteered with his late twin brother Gordon with Calgary Meals on Wheels, driving and delivering meals to people in need. He loved to golf, often playing three rounds a week as a long-term member of the Carstairs Community Golf Club, where he had many friends. More recently Doug and Helen moved into the Scenic Grande independent living complex where Doug was an active bridge player, was part of the Resident’s Council, and was the proud owner of Kellsie, one of the community’s favourite furry friends.

Doug will be remembered and greatly missed by Helen, his wife of 61 years, his sons, Tony (Janet) and Mark (Michele); and his daughter Valerie. He will remain a major influence to his six grandchildren, Jeffrey, Megan, Nicholas, Samantha, Jessica, and Travis. Doug was predeceased by his parents, John S. and Marguerite (nee MacDonald) Taylor; three brothers, Donald Stuart, William John, and Gordon Cosmos; and one grandson David James in infancy.

Relatives and friends are invited to Prayers and Tributes at McINNIS & HOLLOWAY (Crowfoot, 82 Crowfoot Circle NW, Calgary, AB) on Tuesday, November 23, 2021 at 3:00 p.m. Reception to follow in the Hospitality Centre at the Funeral Home. Those attending will be asked to provide valid government identification (with name and date of birth) AND confirm one of the following: (A)Provincial vaccine record with QR code (paper or digital); OR (B)negative COVID test (within 72 hours); or (C)valid medical exemption (signed letter); OR (D)under 12 years of age.

Funeral Mass will be celebrated at St. Luke’s Catholic Church (Corner of Northmount Drive & Northland Drive N.W., Calgary, AB) on Wednesday, November 24, 2021 at 10:00 a.m. Condolences, memories and photos can also be shared and viewed here. If friends so desire, in lieu of flowers, memorial tributes may be made directly to St. Francis High School at https://stfrancis.cssd.ab.ca/.

Share Your Memory of
Douglas 'Doug'
Upload Your Memory View All Memories
Be the first to upload a memory!
Share A Memory
Send Flowers