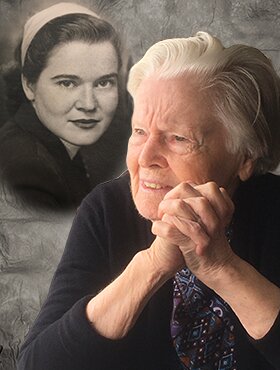 Rose Roberts of Calgary, AB passed away on Monday, November 29, 2021, at the age of 91 years. She passed away in a manner that was typical of how she lived her life; on her own terms, with no palaver, and how she would have wanted it. She just quietly went to sleep.

Mum was born in Frankfurt, Germany on May 31, 1930. She moved with her family to Bischwiller, France around 1935. Mum had a sense of adventure; did a lot of travelling in her life, Europe, and moving to England and Canada by herself. She also had guts, possessing no knowledge of the language when she got there, I asked her how she learned English, and she responded with “talking to others and reading the papers”. And a reader she was, the many volumes of books that arrived in our house were a testament to that.

After arriving in England as a nanny she eventually decided to enrol in nursing training. She graduated in 1956, from St Georges in the East Hospital. Nursing would stand Mum in good stead in her life, it provided a much-needed income when she was unexpectedly widowed – twice – and she was suited to and liked the work. Mum was hard working, intelligent, compassionate and no nonsense.

While working in a hospital in Ontario, Mum met her first husband, Carlos Diaz. He a Dr. and she a nurse. Despite coming from vastly different cultures, they fell in love and married in 1960. In 1961, they became parents and, on the move again, they moved to London, England as my father felt speciality medical training would be better in England. Tragically two years later, my father died of a blood clot while recovering from pneumonia. After a brief time in South America, we moved to Canada and Mum resumed her nursing career and started life as a single parent. Seven years later, through a connection with a babysitter’s widowed brother in-law - Mum was introduced to her second husband, Cecil Roberts. After a courtship via letters from Canada and England, Mum and I moved to Buckinghamshire, England in 1970. Bob (as Cecil was called) and Mum married in 1971, and Chris was born in 1972. Mum and Bob were a good match, they enjoyed the garden, a low-key life, and most importantly they loved each other. However, Canada and more lucrative work opportunities were envisioned and in 1980, we came to Calgary. Mum then worked as an RN at the Rockyview Hospital and Bob worked at Fluor Canada. Tragically Mum was widowed again when Bob sadly died of cancer in 1988. Mum carried on working as a nurse until she was 65 years old.

When Mum was a child, she was told (and this is a rough translation from German), that she had “hair on her teeth”. What that meant was that she was strong, and she sure was and she sure needed to be. We will always remember her for that strength, her superior work ethic (I didn’t see dust in her house until she was in her 70’s), her huge love of animals; cats and dogs adorned the various places we lived over the years, her great sense of humour, her self-discipline, her many nursing friends, her beautiful knitting creations and her love for us.

Rose is survived by her daughter and son-in-law, Erika Diaz and Bill Garman; grandchild Arin Garman, son Chris Roberts, and brother Karl Holderbach of Bischwiller, France. She is also survived by two nephews and their families, and relatives in Germany. To say she will not be forgotten is an understatement.

A Celebration of Rose’s Life will be held at the Parkland Community Hall (505 Parkvalley Road SE, Calgary, AB) on Saturday, June 11, 2022, at 12:00 p.m. Please come and celebrate Mum and share your stories. Condolences, memories, and photos may be shared and viewed here. If friends so desire, in lieu of flowers, memorial tributes may be made directly to the animal shelter of your choice.

Thank you to the wonderful people at Providence Care Centre, who were so good to Mum over the past five and a half years.

Share Your Memory of
Rose
Upload Your Memory View All Memories
Be the first to upload a memory!
Share A Memory
Send Flowers