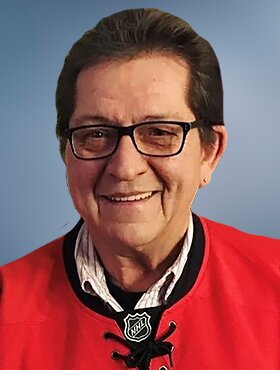 Lloyd Winsor, beloved husband of Rosaria Winsor (nee Dillon) of Calgary, AB, passed away on Monday, April 11, 2022, at the age of 66 years.

Lloyd was born in Wesleyville, Newfoundland, on September 3rd, 1955. Lloyd enjoyed his time spent living in Montreal as a teenager, and was a proud resident of Mt. Pearl, Newfoundland before settling in Calgary, Alberta in 1995.

He was a member of the Legion and played on their darts team for many years, travelling across Canada and winning countless tournaments. Lloyd was extremely proud of this time and made many friends along the way.

Lloyd was a lifelong, diehard fan of the Montreal Canadiens. Skating at the Montreal forum was one of the highlights of his life.

He will be most remembered for his dry sense of humor, his fabulous steaks, his affinity for magic tricks and storytelling and his general love of being personable. Lloyd could, and would, talk to anyone.

Lloyd was predeceased by his father Daniel Winsor, stepfather Prince Dyke, his mother Pearl Seward, and his beloved uncle Stu.