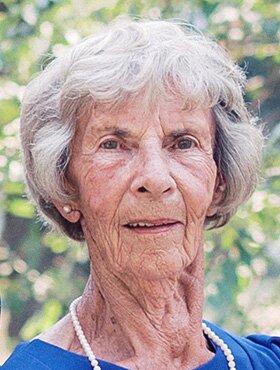 We are saddened to announce the passing of Joan Homer of Calgary, AB, after a brief illness, at home peacefully with  family by her side, at the age of 83.

Joan was born in St. John’s, NL to Emma and Gerald Lewis, the older sister to Geoff (Barb). Joan is survived by her husband Gary, her daughters, Gail, and Cathy (Al Holm); and son Don (Barb). She is also survived by her nine much-loved grandchildren and seven great-grandchildren.

Following two years in the Faculty of Education at Memorial University and two years of student teaching in St. John’s, Joan and Gary moved to Halifax where they were married.  Gary completed his Law Degree at Dalhousie University and Joan continued with her teaching. She and Gary moved to Calgary in 1960 where she dedicated herself to developing early education programs which provided children with an opportunity to develop a love for learning.

Joan was an active volunteer. She became a Track and Field Official and officiated at many events including the Commonwealth Games and the World University Student Games when both were in Edmonton. She was a member of the Children’s Hospital Aid Society and an active member of St. Andrew’s United Church.

Joan was extremely proud of her children and their spouses, her grandchildren and their partners and the “greats”. Family gatherings were one of her greatest joys and it was important for her to connect with each of them on a regular basis.

In her later years, Joan accompanied and supported Gary in his volunteer activities with the CNIB and the World Blind Union. They enjoyed travelling together especially time away in the colder months, but she always wanted to be home for Christmas with family, and springtime.

Exercise was important to Joan and she enjoyed early morning aquasize and swimming at the Acadia Pool for many years. She was also an ardent gardener, often starting her sweet peas in egg cartons indoors before transferring them to the garden.

The family would especially like to thank Joan’s many caregivers for their devoted attention to her during her final weeks.

Funeral Service will be held at McInnis & Holloway Deerfoot South 12281- 40th Street SE, Calgary, Alberta on Saturday, April 23, 2022 at 2:00 p.m. Reception to follow in the Hospitality Centre at the Funeral Home. Family and friends who are unable to attend in person are invited to join Mrs. Homer’s service streamed live (see below) on the day of the service. For those who are unable to view live, a recording of the service will be posted. Condolences, memories, and photos may be shared and viewed at www.McInnisandHolloway.com.