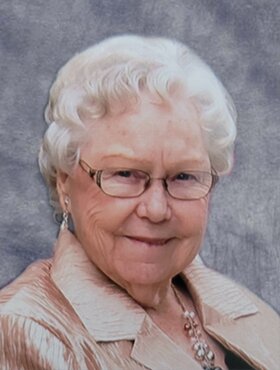 Audrey Skerry (nee Henderson), also known as “Nana” to her grandchildren, beloved wife of Stanley Skerry, of Calgary, AB, passed away on Monday, April 25, 2022, at the age of 91 years.

Audrey was born in Turner Valley, AB, on June 24, 1930, to parents, Henry (Harry) and Mary (Mamie) Henderson. Audrey married Stanley Skerry in 1947. Together they had four children as well as grandchildren and great grandchildren.  The family lived in Calgary for most of their lives and in this past September celebrated their 74th wedding anniversary.

Besides her loving husband Stanley, Audrey is survived by her three daughters and two sons-in-law, Wendy Lynne and Leo Walter of St. Albert, AB, Karen Jill and Gregor Pollock of Calgary, AB, and Cindy Gay Leask of Calgary, AB; one son and daughter-in-law, Darrell Stanley and Sheila Skerry of Airdrie, AB, seven grandchildren, and eight great-grandchildren. Audrey is also survived by her sister Beulah McLaughlin.

Audrey had a long and happy life and was loved by all who knew her.

She passed away quietly in the company of her spouse and family.

She will remain forever in our hearts.

Audrey’s family would like to thank the kind staff at AgeCare Midnapore Long-term Care, for their excellent caregiving during Audrey’s stay.

Share Your Memory of
Audrey
Upload Your Memory View All Memories
Be the first to upload a memory!
Share A Memory
Send Flowers