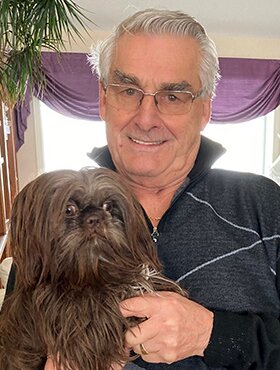 Ron Pirart, beloved husband, and best friend of Sharon Pirart (nee Boucher), passed away after a brief and courageous battle with cancer. Ron was born in Melfort, SK, and moved to Winnipeg, MB, where he met his beautiful bride and started his 55-year career in the Aerospace Industry. In 1968, he married Sharon and started a family, and they decided to move to Airdrie, AB in 1979 where he would venture out and start his own aircraft inspection business. He retired from RAPid Inspections in 2018 and passed the business to his sons to continue the legacy he built.

Besides his loving wife, Ron is survived by his three children Kevin (Janeen), Cory (Carla) and Loren (Brian), and his three grandchildren who were the pride and joy of his life; Danica, Livia, and Rhett. He is also survived by his sisters-in-law, Martha and Betty, his brother-in-law and his wife on Sharon’s side; Brian and Petie, along with many nieces and nephews and their children.

Ron was predeceased by his parents Elanor and Leo Pirart, his brothers Robert, Don, Leon and Ray.

Ron loved to go boating, fishing, golfing, and hunting, all of which he could do from his favourite spot, the cabin at Buffalo Lake.  Ron spent over 24 years there in front of the campfires that he was famous for, enjoying family, the “lake friends” he made, and those who joined him for a weekend in his special place.  Ron was an active member and past President of the Calgary Friendship Force, where he had many wonderful adventures and travels with his friends from this club, and the many friends he made around the world. Ron was also an active member of the Airdrie Over 50 Club, a Rotarian, and kept everyone at Genesis Place in laughs during his daily routine of going there to visit with everyone (under the premise of getting some exercise!!).

A few years ago, Ron decided his travelling days were numbered (his exact quote was “no more overseas travel for me!”), and he wanted to have a special four-legged friend to keep him company while Sharon continued her dreams of travelling. CeCe became his best buddy and never left Ron’s side, even in his last moments. His love for all his dogs over the years, and all the dogs from the rest of the family, was always a special part of who he was, and all animals - from the horses and sheep to the cats, and even the chickens - formed a special bond with their “Dad”.

Ron was always known for his sense of humour - even if it was sometimes off-colour - but always with good intentions. He could tell a joke that fit any occasion or conversation and he always got a laugh. His joy in the everyday things he did, his generosity, patience and kindness will be dearly missed. The world needs more people like Ron to help make it a better and happier place.

To everyone who supported the family and came to visit Ron in his last days, we cannot thank you enough. Your friendship to him and the family mean so much in this time of deep sadness. At Ron’s request, there will be no memorial service. He had planned a festive party for everyone on Father’s Day weekend – he figured if there was going to be a celebration, he wanted to be there enjoying time with his family and friends. This party was planned, but sadly with the speed of his illness, it was never possible. The immediate family will be gathering on that weekend in his favourite place to say a special goodbye.  In lieu of flowers, and as a way for everyone else to say goodbye, those who wish may donate to a charity of their choice or give flowers to a loved one in Ron’s memory.