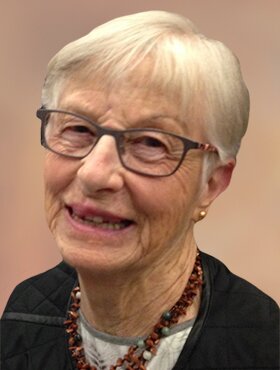 Betty Miller passed peacefully after a short struggle with pancreatic cancer on Thursday, May 26, 2022.

She is survived by sons, Rod (Laurie) and Andy (Kim). Betty is also survived by her six grandchildren and her sister, Barb. Betty was predeceased by her husband, Bill and son, Tim (Laura).

Betty was born in Stayner, ON and maintained close ties to the people and the area throughout her life. In the fifties she headed to Toronto, ON to pursue training at Toronto Western Hospital, where she graduated as a RN in 1958. While in Toronto, she met Bill, the love of her life, her partner and husband for 60 years. The boys followed in the sixties while Betty and Bill lived in Scarborough, ON. In the eighties they moved from their established home and community in Ontario, to start a new life in Calgary, AB. This challenge was well met, and they grew deep roots again in Calgary. Betty was always closely involved with the people surrounding her.  Developing strong connections throughout her life with childhood neighbours, nursing classmates, and congregations in Scarborough, ON at Washington United and later in Calgary, AB at St Andrews United. Betty was active in her community volunteering as a CGIT leader, as Chair of a Discernment Committee supporting ministerial students, fund-raising for Alberta Theatre Projects, and preparing Hidy and Howdy for action during the ‘88 Olympics. Betty traveled widely with Bill, touching most continents, but it was family and people that meant the most to her. Family ski trips with extended family in a large farmhouse were loved and oft repeated.  Stories of travel were often as much about fellow travelers and acquaintances as the places visited. The family cottage they built on Georgian Bay was a favorite location to gather with friends and family where Betty enjoyed her role as hostess.

If you would like to make a donation in Betty’s memory, please consider St Andrew’s United Church, andychurch.org.

Share Your Memory of
Betty
Upload Your Memory View All Memories
Be the first to upload a memory!
Share A Memory
Send Flowers