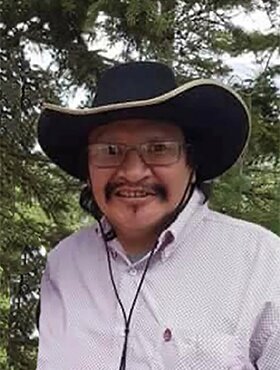 It is with profound sadness we announce the sudden passing of Shane Simeon on Saturday, May 29, 2022 at the age of 52 years old.

Shane Jason Simeon was born to his late parents, Urban and Harriet Simeon on April 3rd , 1970. Shane’s parents owned cattle and horses, so he grew up around ranching and rodeoing.  His ingrained passion of the cowboy life was expressed in his cowboy western attire.  He wore his cowboy boots and cowboy hat every day.  Additionally, he was raised with strong Stoney Nakoda traditions and family values.  His kin relationships were very important to him. He addressed his family and relatives accordingly and his friends by their nicknames.  Shane was a natural athlete who excelled in various sports and actively participated in hockey, baseball, and basketball. He earned many trophies for his outstanding athletic abilities and in rodeo as a bull rider.  Shane was a talented musician; he was a guitarist and a singer.  Later in his life, it was listening to music that got him through the challenging times, and to simply enjoy the good times.  Whenever he was at home the music would be playing all day long.  Shane had a sense of humor and a way of saying things.  He would bring laughter and a smile even in the most serious moments.  Shane was educated in Morley and worked for the nation right until his passing. His recent favorite pastime was at the casino. He will be fondly remembered and the memories forever treasured.

Family would like to express their sincere gratitude towards Eldon Snow and Jackie Rollinmud for their generosity, hospitality and friendship towards Shane.

Share Your Memory of
Shane
Upload Your Memory View All Memories
Be the first to upload a memory!
Share A Memory
Send Flowers